The Ryan White Comprehensive AIDS Resources Emergency Act (Ryan White CARE Act, Pub.L. 101–381, 104 Stat. 576, enacted August 18, 1990), was an act of the United States Congress and is the largest federally funded program in the United States for people living with HIV/AIDS. The act sought funding to improve availability of care for low-income, uninsured and under-insured victims of AIDS and their families. The act is named in honor of Ryan White, an Indiana teenager who contracted AIDS through a tainted hemophilia treatment. He was diagnosed with AIDS in 1984 and was subsequently expelled from school because of the disease. White became a well-known advocate for AIDS research and awareness, until his death on April 8, 1990.

Ryan White programs are "payer of last resort" which fund treatment when no other resources are available. As AIDS has spread, the funding of the program has increased. In 1991, the first year funds were appropriated, around US$220 million were spent; by the early 2000s, this number had almost increased 10-fold. The Act was reauthorized in 1996, 2000, 2006, and 2009. The program provides some level of care for around 500,000 people a year and, in 2004, provided funds to 2,567 organizations. The Ryan White programs also fund local and state primary medical care providers, support services, healthcare provider training programs, and provide technical assistance to such organizations.

In fiscal year 2005, federal funding for the Ryan White CARE Act was $2.1 billion. As of 2005, roughly one-third of this money went to the AIDS Drug Assistance Programs (ADAP) which provides drugs for 30 percent of HIV-infected patients. The primary activity of ADAP is providing FDA-approved prescription medication.

The Ryan White CARE Act mandates that EMS personnel can find out whether they were exposed to life-threatening diseases while providing care. (This notification provision was included in the original 1990 act, dropped in the 2006 reauthorization, and reinstated in the 2008 reauthorization).

The Yea votes represented 98% of the country’s population by apportioning each state’s population to its voting senators. 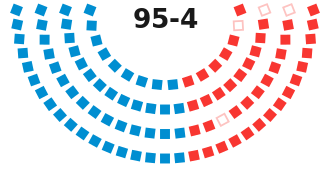