This was a vote to pass S. 1322 (104th) in the House. This vote was taken under a House procedure called “suspension of the rules” which is typically used to pass non-controversial bills. Votes under suspension require a 2/3rds majority. A failed vote under suspension can be taken again.

The Jerusalem Embassy Act of 1995 is a public law of the United States passed by the post-Republican Revolution 104th Congress on October 23, 1995. The proposed law was adopted by the Senate (93–5), and the House (374–37). The Act became law without a presidential signature on November 8, 1995.

The Act recognized Jerusalem as the capital of the State of Israel and called for Jerusalem to remain an undivided city. Its purpose was to set aside funds for the relocation of the Embassy of the United States in Israel from its location in Tel Aviv to Jerusalem, by May 31, 1999. For this purpose it withheld 50% of the funds appropriated to the State Department specifically for "Acquisition and Maintenance of Buildings Abroad" as allocated in fiscal year 1999 until the United States Embassy in Jerusalem had officially opened. Israel's declared capital is Jerusalem, but this is not internationally recognized, pending final status talks in the Israeli–Palestinian conflict.

Despite passage, the law allowed the President to invoke a six-month waiver of the application of the law, and reissue the waiver every six months on "national security" grounds. The waiver was repeatedly renewed by Presidents Clinton, Bush, and Obama. President Donald Trump signed a waiver in June 2017. On June 5, 2017, the U.S. Senate unanimously passed a resolution commemorating the 50th anniversary of reunification of Jerusalem by 90-0. The resolution reaffirmed the Jerusalem Embassy Act and called upon the President and all United States officials to abide by its provisions. On December 6, 2017, Trump recognized Jerusalem as Israel's capital, and ordered the planning of the relocation of the embassy. However, following the announcement, Trump signed an embassy waiver again, delaying the move, as mandated by the Act, by at least six months. Legally, however, the U.S. embassy can be moved at any time without reliance on the Act.

On February 23, 2018, President Trump announced that the US Embassy in Israel would reopen at the Arnona consular services site of the then US Consulate-General in Jerusalem. The United States Embassy officially relocated to Jerusalem on May 14, 2018, to coincide with the 70th anniversary of the Israeli Declaration of Independence. 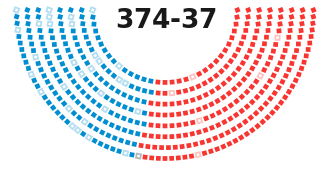