The Dodd–Frank Wall Street Reform and Consumer Protection Act (Pub.L. 111–203, H.R. 4173, commonly referred to as Dodd–Frank) was signed into United States federal law by US President Barack Obama on July 21, 2010. Passed in response to the 2008 global financial crisis, the Act brought the most significant changes to financial regulation in the nation since the regulatory reform that came following the Great Recession. It made changes in the American financial regulatory environment affecting all federal financial regulatory agencies and almost every part of the nation's financial services industry.

The law was initially proposed by the Obama administration in June 2009, when the White House sent several proposed bills to Congress. The legislation was introduced in the House in July 2009. On December 2, 2009, revised versions of the bill were introduced in the House of Representatives by then-Financial Services Committee Chairman Barney Frank, and in the Senate Banking Committee by former Chairman Chris Dodd. Dodd and Frank were both involved with the bill; the conference committee that reported on June 25, 2010 voted to name the bill after both men.

Studies have found the Dodd–Frank Act has improved financial stability and consumer protection, although there has been debate regarding its economic effects. The Act established the Consumer Financial Protection Bureau (CFPB), which from inception to April 2017 had "returned almost $12 billion to 29 million consumers and imposed about $600 million in civil penalties."

On June 8, 2017, the Republican-led House passed the Financial CHOICE Act which, if enacted, would roll back many of the provisions of Dodd–Frank. In June 2017, the Senate was crafting its own reform bill. 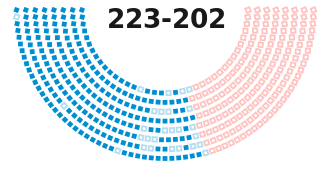 Key:
Democrat - Aye Democrat - No Republican - No
Seat position based on our ideology score.