6/17/2013: In what could become an annual occurrence, Congress yet again faces a looming deadline to resolve the problem of student loan interest rates. Without Congressional action, the rate on federally backed Stafford loans is set to double from 3.4 percent to 6.8 percent on July 1.

The Senate in early June failed to advance two bills meant to prevent this imminent increase in rates. A bill backed by Democrats would extend the current interest rate for two years, and offset the cost by ending three tax breaks. A GOP bill would peg all newly issued student loans to the U.S. Treasury 10-year borrowing rate plus 3 percentage points. Given the current Treasury rate of 1.75 percent, a student taking out a loan this coming school year would pay 4.75 percent for the life of the loan under this proposal. The Democrats’ bill garnered 51 votes, shy of the 60 needed to end debate, while the Republican proposal failed 40 to 57.

Meanwhile, the House in May passed a different Republican plan in a 221 to 198 vote, largely along party lines. This plan would permanently fix the problem by tying the student loan interest rate to the 10-year Treasury rate plus 2.5 percent. The bill would also reset the rate every year, though students could consolidate their loans into a fixed rate after graduation, and it would cap this rate at 8.5 percent.

The potential change in interest rates on subsidized student loans has its origins in a 2007 bill intended to boost college aid. In addition to increasing grant amounts to students and improving access to student loans, the College Cost Reduction and Access Act established a stepped reduction in interest rates. Beginning in July 2008, the rate was lowered over the course of four years from 6.8 percent to 3.4 percent, and was supposed to revert to 6.8 percent in July of last year.

Just two days before the July 1, 2012 deadline, Congress passed an extension of the 3.4 percent rate for another year. The temporary fix was adopted as part of a transportation spending bill that passed the House by a vote of 373 to 52 and the Senate 74 to 19. The $6 billion price tag associated with the extension was paid for by limiting students’ eligibility to subsidized loans to six years and changes in pension laws. A year has gone by, and now legislators are back at square one. 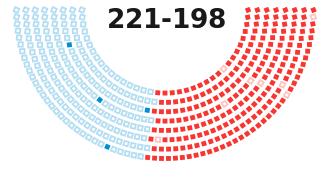