This was a vote to pass H.R. 648 (114th) in the House. The federal budget process occurs in two stages: appropriations, which set overall spending limits by agency or program, and authorizations, which direct how federal funds should (or should not) be used. Appropriation and authorization provisions are typically made for single fiscal years. A reauthorization bill like this one renews the authorizations of an expiring law. This vote was taken under a House procedure called “suspension of the rules” which is typically used to pass non-controversial bills. Votes under suspension require a 2/3rds majority. A failed vote under suspension can be taken again.

Traumatic injuries are the leading cause of death among people aged 1 to 44, according to the Centers for Disease Control and Prevention. Yet 45 million Americans don’t have access to a trauma center within an hour of their location, which is nicknamed “the golden window” for maximum odds of saving a patient’s life. This despite 35 million Americans experiencing a traumatic injury each year, which makes it the third-most costly condition each year at $67.3 billion, trailing only heart disease and cancer.

Rep. Michael Burgess (R-TX26), one of 17 physicians in Congress, wants to help solve that problem. His bill H.R. 648, the Trauma Systems and Regionalization of Emergency Care Reauthorization Act, would reauthorize existing trauma center grants through Fiscal Year 2020, but also improve emergency medical services in rural areas, fund pilot projects for new models of emergency care, and require that all burn centers meet standards set out by the American Burn Association.

We give the bill a 77% chance of being enacted, the second-highest prognosis of any bill not yet enacted.

Supporters say it is a necessary investment to save lives, especially with the number of trauma centers decreasing in the past decade due to budget cuts.

“As a physician, I know how important it is that we have adequate, fully developed and functional trauma systems in the U.S.,” Burgess said. “To let another system atrophy and widen the disparity between areas with access to trauma systems and those without is unfair to patients who need urgent care when the unthinkable happens.”

“[The bill would] reauthorize vital trauma and emergency care programs that will help prevent trauma center closures and will drive the development of more efficient regionalized systems of emergency care and transport as well as our ability to most effectively save lives,” said the Society of Trauma Nurses in a statement of support. “The federal government has not made necessary investments in trauma, leaving a fragile trauma system to falter. This looming crisis in access to trauma care must be fixed before further deterioration.”

The bill passed the House in March 2015 by 382 to 15 — a virtually unheard-of margin these days. All 15 “nay” votes came from House Republicans. GovTrack Insider was unable to track down any quotes or explanations from a Member of Congress who opposed the bill explaining their rationale. The Congressional Budget Office estimates the bill would cost $126 millionover the next five years.

It subsequently went to the Senate, introduced as S. 763 by Sen. Jack Reed (D-RI). Despite its overwhelming House vote margin, the bill was referred to the Senate Health, Education, Labor, and Pensions Committee where it has lingered for more than a year without receiving a vote. History may repeat itself: a nearly-identical House bill also introduced by Burgess passed by voice vote in 2014 and was reported by committee in the Senate but never received a vote there either. 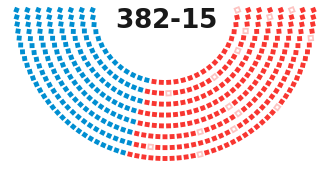