On the first day of this Congress, January 3, 2015, 241 bills were introduced in the House and Senate. Legislation introduced on Day 1 is often meant to send a bold statement that “these are our top priorities” by party leadership, so the bill labeled S. 1 is hugely important. S. 1 in the current Senate — as well as H.R. 3 in the House — was the Keystone XL Pipeline Approval Act, addressing a contentious issue related to energy, the environment, and jobs.

A pipeline of over 1,000 miles proposed by the company TransCanada to transport oil from Canada to the U.S., the Keystone XL project became a litmus test among environmental groups and progressives who argued that construction would perpetuate our reliance on fossil fuels and increase the risk of a spill or similar natural disaster. Republicans — many of whom deny that man-made climate change exists — had no qualms with the environmental concerns and claimed the project would create “thousands of jobs,” although the State Department estimated it would only be 35 jobs.

In November 2014, after the midterm elections but prior to the new Congress convening, the Senate voted on a bill introduced by Sen. John Hoeven (R-ND) that would have approved the construction, but it lost by a single vote. The vote was 59 in favor to 41 against, but it needed 60 votes to pass. Every Republican voted in favor, while Democrats were largely opposed 14–39, although some Democrats — especially those in midwestern and Great Plains states where the project would physically pass through — voted in favor. Republicans, in the Senate minority at the time, vowed the pipeline would be one of their top priorities upon taking over the majority two months later.

Sure enough, Sen. Hoeven promptly sponsored the bill again as the first order of business for the new Senate. Only a few weeks after in late January 2015, the Senate approved it 62 to 36, barely clearing the 60-vote threshold needed, again with every Republican in favor and Democrats even more opposed than before with 9–34 against. This was followed by the House voting 270–152 in favor that February, with every Republican except Rep. Justin Amash (R-MI3) in favor and Democrats 29–151 against.

The votes were seen as a direct rebuke to President Obama’s oppositionannounced a few months prior. Sure enough, Obama vetoed the bill in late February 2015, only the third veto of his presidency and the first on what was considered to be “meaningful” legislation. The Senate attempted to override the veto, which required 67 votes, but the veto override vote was 62–37, killing the bill during this Congress.

Don’t be surprised if it’s one of the first bills that Republicans introduce in the next Congress, whether they retain their majorities or not — likely to be introduced by Sen. Hoeven again for the third Congress in a row. (Though Hoeven running for reelection in North Dakota, he is considered a virtual lock to keep the seat.) If a Democrat wins the presidency, Republicans will attempt to shame the White House for opposing a “job creating” project; if a Republican wins, the pipeline would likely be approved.

With Hillary Clinton opposing the pipeline and currently leading in presidential polls, the Keystone pipeline seems unlikely to be enacted this year. But if Donald Trump’s campaign closes the gap in national polls, his vow to approve the pipeline under the claim that it would have “no impact” on the environment could be fulfilled. Even then, his plan to give a share of the profits back to American taxpayers instead of just for the TransCanada organization would likely run afoul of World Trade Organization agreementsto which the U.S. is a party. 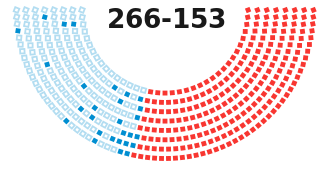