House Democrats and a portion of the Republican House majority teamed up last week to win an important battle in the fight to bring back the Export-Import bank, a quasi-governmental agency that provides subsidies to foreign companies buying American goods.

On Monday, October, 26, 2015, the bipartisan coalition successfully used a rare procedural maneuver to call up legislation reauthorizing the agency to the House floor for consideration. The maneuver, known as a “motion to discharge,” technically discharged a “rule” from the Rules Committee that establishes terms the bill will be debated under. The final vote count on the discharge was 246–177, with all House Democrats voting in favor along with 62 Republicans.

The rule and then the bill itself were then passed on Tuesday, 313–118, sending it to the Senate, which had passed a similar measure in July.

The maneuver essentially bypassed Financial Services Committee Chairman Jeb Hensarling (R-TX), who opposes the bank and has prevented his committee from advancing reauthorization legislation to the House floor.

The move to discharge the legislation out of committee was spearheaded by Rep. Steve Fincher (R-TN), and it is the first successful use of a discharge petition since 2002, when it was used by a bipartisan coalition for advancing the McCain-Feingold campaign finance reform bill in the House. Fincher’s petition was signed by a majority of House Democrats and 42 House Republicans, and it reached its target number of 218 signatures (representing a majority of House members) on October 9, just hours after it was officially filed.

The Export-Import bank is a government corporation that, from 1934 until July 2015, subsidized foreign purchases of U.S. goods through special financing, loan guarantees, and insurance that would otherwise be unavailable from private lenders. In recent years the bulk of its subsidies have gone to foreign companies and governments purchasing equipment from just a few large U.S. companies, including Boeing, Caterpillar, and General Electric.

For years the bank had been a target of the left, but recently conservatives have been the lead critics of the bank, calling it a prime example of collusion between the government and private industry that they believe unfairly distorts the market. Hensarling has called the bank “crony capitalism,” and others have derided it as “The Bank of Boeing.” On July 1, 2015, after months of debate among Hill Republicans, authorization for the Export-Import bank to engage in new business was allowed to officially sunset.

How the Ex-Im Bank Would be Reformed

Fincher’s bill would reauthorize the bank until September 30, 2019, and it includes a number of reforms to how the bank operates, including the following:

The reauthorization legislation still has to pass through the Senate in order to become law and actually reopen the bank for business. Unfortunately for Export-Import Bank supporters, Senate Majority Leader Mitch McConnell (R-KY), who controls which bills get considered on the floor, is not in favor of renewing the bank’s charter.

On Thursday, Sen. Maria Cantwell (D-WA) attempted to bring the House’s reauthorization bill up for immediate passage by unanimous consent, but she was blocked by McConnell.

However, if somehow there is a vote on reauthorization — possibly in the form of an amendment to other legislation — it’s likely that it could pass. When the Senate voted on an Export-Import reauthorization bill back in July, as an amendment to the highway bill that never ended up becoming law, it passed with a filibuster-proof 64 votes. 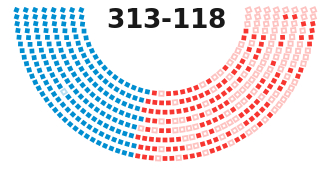