A bill that would expand background checks on Iraqi and Syrian refugees hoping to enter the United States has moved quickly through congressional procedures. H.R. 4038, the American Security Against Foreign Enemies SAFE Act, received a House vote on November 19, just two days after it was introduced. The vote succeeded 289-137 with almost all Republicans and 47 Democrats voting in favor. The Senate voted down the bill in a cloture vote. The President had said he would veto the bill if it also passed the Senate.

Democrats successfully stymied the bill by attempting to force votes on a handful contentious amendments, including one denouncing Donald Trump’s proposal to ban Muslims from entering the United States.

Reid said that the Democrats would only agree to move forward with the refugee bill if they were allowed to hold votes on four amendments -- denouncing Trump’s muslim ban, increasing funding for anti-terror policing, denying gun sales to people on no-fly lists, and a comprehensive anti-ISIS bill put forward by Sen. Sherrod Brown (D-OH).

McConnell rejected Reid’s offer on amendments, and Reid in turn whipped his caucus to vote against proceeding with the refugee bill. As a result, the bill failed to attract enough votes in the Senate to achieve cloture, a parliamentary procedure used to limit debate and move forward with a motion or a bill. Cloture motions require a 3/5th majority (or 60 votes) to be approved, but the motion only got 55 votes. Two Democrats joined the Republicans in supporting the motion -- Joe Manchin (D-WV) and Heidi Heitkamp (D-ND).

What the bill would have done

Millions of refugees from Syria and Iraq have been forced out of their homes as a result of the ongoing civil war in Syria and militarization by the Islamic State (ISIS). Many of these refugees hope to find sanctuary in the United States and European countries. Under existing law, the United States vets refugees for one-and-a-half to two years prior to allowing refugees to enter the country. If enacted, this bill would likely pause the screening process for a short time, while new background check procedures are developed, and then lengthen the time the screening process takes.

H.R. 4038 would have expanded the screening process for those refugees attempting to enter the United States by requiring the Federal Bureau of Investigation (FBI) to conduct its own background checks in addition to the Department of Homeland Security’s (DHS). Any refugee would be prohibited from entry until the FBI certifies that they pose no security threat. Refugees would only be admitted with the unanimous agreement of the FBI, DHS, and Director of National Intelligence.

The bill was introduced by House Republicans after a report that an individual who participated in the Nov. 13 attack on Paris used a Syrian passport and matched fingerprints with someone who entered through Greece in October. “Top Administration counterterrorism and security officials have repeatedly told Congress that the current refugee vetting process is insufficient to ensure terrorists are not admitted as refugees,” House Republicans wrote in a summary of the bill. Republicans proposed H.R. 4038 on the belief that the bill will prevent possible attacks from occurring within the United States. (The attackers in the Paris attack are now believed to have been primarily of French and Belgian nationality, despite the use of the Syrian passport, but were also linked to a branch of ISIS.)

But Democratic Whip Rep. Steny Hoyer (D-MD5) said the current vetting process is just fine. “The bill rests on a faulty assumption that the European refugee screening process is similar to the United States screening process. This is entirely inaccurate,” he wrote in today’s Daily Whip. Rather than improve security, Hoyer said that H.R. 4038 would prevent refugees from entering the country by making the vetting process overly inefficient. He described the bill as a “knee-jerk reaction” to a situation in Europe dissimilar to our own. Even with Democratic leadership against the bill, one-fourth of Democrats still voted to pass it in the House vote. 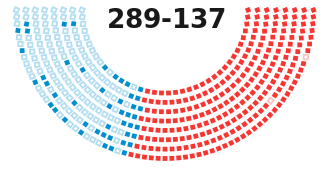