The United States is experiencing a boom in corporate mergers and acquisitions. Last year was a record year for mergers, both in terms of shear corporate value involved and the number of mega-mergers between large companies, and analysts don’t expect the trend to change in 2016.

To Republicans, that’s a good thing— mergers create a more efficient economy that reduces prices for consumers —and they are advancing legislation that would take away some of the Federal Trade Commission (FTC)’s power to block future corporate mergers.

The House of Representatives this week will be voting on a bill from Rep. Blake Farenthold (R-TX), entitled the Standard Merger and Acquisitions Review Through Equal Rules Act (SMARTER Act), that would strip the FTC of its authority to issue cease and desist orders against proposed mergers, acquisitions, and joint ventures that it can show would create an “unfair method of competition” as defined by the Sherman Antitrust Act.

What the bill would do

By taking away this authority, the bill would restrict the FTC’s role in the merger review process by requiring them to follow the more limited standards that the Department of Justice must use in the review process.

Instead of using the language set forth in the Federal Trade Commission Act for issuing a preliminary injunction against mergers, which merely requires that the injunction be “in the public interest,” the FTC, like the DOJ, would only be able to issue injunctions if they can show that the merger would substantially lessen competition or tend to create a monopoly.

The bill would also take away the FTC’s power to commence its own administrative adjudicatory proceedings for challenging mergers. The FTC currently has the power to pursue administrative litigation on merger proposals even after courts have ruled against their petitions for injunctive relief. Under this bill the FTC would be limited to court proceedings for its merger reviews.

The bill’s supporters say their intention with the legislation is to bring more parity and fairness to the merger review process.

“When businesses have to deal with the federal government, we have to make sure that their treatment by the government is fair, consistent, and transparent,” Rep. Farenthold said when the bill passed out of committee. “Unfortunately, merger reviews today can go against that principle, and instead come down to a coin flip of whether the Department of Justice or the Federal Trade Commission reviews the transaction.”

But FTC Chairwoman Edith Ramirez says the bill would take away one of her agency’s key tools for promoting consumer welfare.

“By seeking to alter the Commission’s adjudicative function, the proposed legislation risks eroding a fundamental institutional attribute of the FTC,” Ramirez said in a testimony given to the Senate Judiciary Committee. “This quasi-judicial role is a defining characteristic of the

agency  — authority Congress very deliberately granted to the FTC when the agency was created to serve as a complement to enforcement by DOJ.”

The bill has been reported by committee and is expected to soon be considered by the House as a whole. Companion legislation from Sen. Mike Lee (R-UT) is also pending in the Senate. 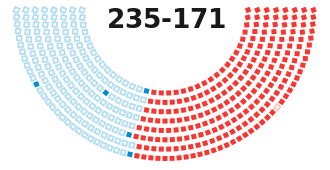