This was a vote to pass H.R. 2901 (114th) in the House. This vote was taken under a House procedure called “suspension of the rules” which is typically used to pass non-controversial bills. Votes under suspension require a 2/3rds majority. A failed vote under suspension can be taken again.

Domestic floods have been increasing both in number and intensity, due largely to the effects of the climate crisis: Coastal flooding days have more than doubled in the United States since the 1980s, according to a report from Climate Central. And scientists have documented a sharp increase in so-called “sunny day flooding.” September’s flood in Louisiana caused $8.7 billion in damage, damaged at least 60,000 homes and killed 13 people.

A bill in Congress that passed the House unanimously could make major changes in flood insurance.

Under current law, the federally-run National Flood Insurance Program (NFIP) is “the only safety net” for those living in flood zones. The Flood Insurance Market Parity and Modernization Act, H.R. 2901 and S. 1679, would for the first time allow private flood insurance in those zones, provided it meets existing NFIP requirements.

Supporters argue the bill allows the private sector to fill in gaps that the public sector might not be able to and could provide a valuable lifeline when lives and homes are at stake.

“This important legislation would ensure that policyholders can return to the NFIP without losing their grandfathered status or subsidy if they had left the program and obtained coverage in the private market and that coverage no longer meets their needs,” Bob Rusbuldt, President and CEO of the Independent Insurance Agents & Brokers of America, wrote in an op-ed. “This is an important safeguard for consumers and small businesses.”

Although the bill passed unanimously in the House, it was not without its critics who argued that the bill would not do enough to protect consumers.

“There are many risks to consumers from the proposal to allow surplus lines carriers into the flood insurance market,” J. Robert Hunter, Director of Insurance for the Consumer Federation of America, wrote to Congress. “The lack of meaningful state regulation of the resulting policies is a primary concern and a reason that the already bad provisions of the bill are even worse in practice than on paper.”

He also warned that it could end up costing taxpayers more by leaving the government with the highest-risk locations:

“Insurers would market to ‘overpriced,’ lower-risk policies… These carriers, of course, will reject applications from higher risk homeowners, and the NFIP would increasingly be left with the highest risk policies, increasing the need for federal subsidies and/or higher NFIP prices to cover losses for a higher risk portfolio of properties,” Hunter wrote. “If prices were raised to make up for this shortfall, that would open the door for even greater cherry picking by the private insurers, creating a death spiral of higher losses and premium charges for the NFIP. “

After attracting 44 cosponsors in the House, 31 Republicans and 13 Democrats, the bill passed the House in April by a unanimous 419–0 vote — a rarity in any Congress but this one especially. An identical bill in the Senate was introduced in June 2015 by Sen. Dean Heller (R-NV) has attracted nine cosponsors, seven Republicans and two Democrats. It has not yet received a vote in either the Senate Banking, Housing, and Urban Affairs Committee or the Senate Small Business and Entrepreneurship Committee. 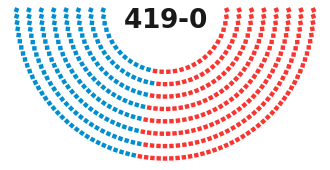