This was a vote to pass H.R. 5658 (114th) in the House. This vote was taken under a House procedure called “suspension of the rules” which is typically used to pass non-controversial bills. Votes under suspension require a 2/3rds majority. A failed vote under suspension can be taken again.

The last bill President Obama signed was H.R. 39 in the 115th Congress, a successor to this bill, the Tested Ability to Leverage Exceptional National Talent Act, or the TALENT Act. It is now Public Law 115–1.

President Obama launched the Presidential Innovation Fellows Program in 2012, to recruit private sector software engineers, designers and others into the public sector for 12-month stints to improve the usability of governmental programs and websites.

Obama highlighted some of the improvements the fellows had brought about during a 2015 speech: “Thanks to their efforts, veterans have enhanced access to care and benefits they’ve earned. Families have greater access to their own electronic medical records. Police departments are making their data searchable online. More of our students gain access to high speed internet in their schools every single day.”

After Obama established the program by executive order, this bill codified its provisions into permanent law, to be run by the General Services Administration (GSA).

Who supported it? Seemingly almost everybody, considering the bill passed with 96 percent support in the House.

“Right now, it can still take hours for citizens to get the IRS on the phone to ask the most basic questions. Parents and students still deal with clunky user interfaces when applying for tuition assistance. And the VA still uses a scheduling system that is a quarter-century old. It doesn’t have to be this way,” lead House sponsor Kevin McCarthy said on the House floor while promoting the legislation.

> “I sponsored the TALENT Act to make sure this innovation program [the Presidential Innovation Fellows Program] continues into the future. By drawing on the great talent of the American people, we can make government effective, efficient, and accountable.”

Very few people opposed the bill, but the 17 Republican holdouts were entirely right-wing Freedom Caucus members. GovTrack Insider could not track down any statements or press releases from a member voting no, possibly indicating a hesitancy to tout their opposition to such a popular bill. But the likely explanation from the Freedom Caucus crowd is opposition to the expansion of a government program at taxpayer expense, popular though it may be. The Congressional Budget Office (CBO) had not produced a cost estimate for the law as of this writing.

The TALENT Act was introduced by the House Majority Leader, Rep. Kevin McCarthy (R-CA23). It passed the House 386–17 on January 11, with all Democrats in favor and Republicans largely in favor with a few holdouts, 217–7.

It then passed the Senate by a unanimous consent voice vote. Obama signed it on his last day in office, mere hours before inauguration.

McCarthy had previously introduced a version of the TALENT Act in July 2016 which passed the House 409–8, an even larger majority than this time around, but never received a vote in the Senate. That’s not to be confused with last Congress’s identically-acronymed To Aid Gifted and High-Ability Learners by Empowering the Nation’s Teachers Act, which didn’t pass and has yet to be reintroduced in this Congress. 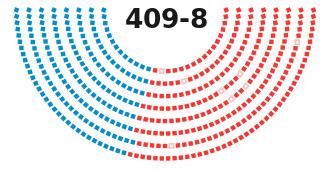