This was a vote to pass H.R. 757 (114th) in the House. This vote was taken under a House procedure called “suspension of the rules” which is typically used to pass non-controversial bills. Votes under suspension require a 2/3rds majority. A failed vote under suspension can be taken again.

North Korea and its leader Kim Jong-Un are seen by many foreign policy experts as one of the greatest foreign threats to the United States. Their massive human rights abuses include forced labor camps, execution of dissidents, and mass starvation among their people. Their cyberwarfare famously targeted Sony in 2014, preventing the American theatrical release of the anti-North Korean film “The Interview.” They may have up to 20 nuclear warheads in their possession and could potentially have the capability to strike the western United States, though nobody knows for sure because the country has a history of refusing or not fully cooperating with United Nations weapons inspectors. The country claims to have tested a hydrogen bomb in January.

This is the backdrop for the North Korea Sanctions and Policy Enhancement Act, H.R. 757 and S. 2144, which became law last week. In a political environment where it’s incredibly difficult to even achieve the three-fifths threshold necessary to pass most bills, even seemingly minor ones, the House voted 418–2 in January on the version introduced by Rep. Ed Royce (R-CA39) while the Senate voted 96–0 earlier this month on the version introduced by Sen. Cory Gardner (R-CO). President Obama signed the bill earlier this month.

“It imposes mandatory sanctions on individuals who contribute to North Korea’s nuclear and ballistic missile program, its malicious cyber-attacks, its censorship activities, and the regime’s continued human rights abuses. It also mandates that the Administration develop a comprehensive strategy to address the regime’s human rights abuses and cyber activities,” said Gardner in last week’s Weekly Republican Address, describing the legislation. “The goal of this bill is simple: to quell North Korea’s aggression, peacefully disarm the regime, and restore human rights.”

As Reutersdescribed, penalties include seizure of assets, visa bans, and denial of government contracts. Unlike most such laws, this one makes most of the sanctions mandatory, rather than giving the President the option of whether or not to impose them.

Sen. Marco Rubio (R-FL) and Sen. Ted Cruz (R-TX) even left the presidential campaign trail to come back to Washington and vote in favor. Sen. Bernie Sanders (I-VT), running for the Democratic nomination, missed the vote. The two dissenting votes in the House were Rep. Thomas Massier (R-KY4) and Rep. Justin Amash (R-MI3). Massie opposed what he perceived as an expansion of President Obama’s powers and the “legitimizing” of the United Nations, which he opposes US involvement with. Amash called the civil asset forfeiture provision unconstitutional.

Senate Foreign Relations Committee Chair Bob Corker (R-TN) lamented that the bill had to be passed at all, saying that an international strategy may be more effective but China was blocking the UN Security Council’s attempts at multilateral action. On Thursday, China switched course and has backed a US-led draft resolution for UN sanctions. As the BBC reported, it would for the first time require UN member states to inspect all cargo to or from North Korea. By some measures, it would be the strongest sanctions imposed in more than two decades. 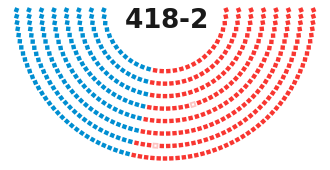