The House began a vote on H.R. 3662, the Iran Terror Finance Transparency Act, last week but in an unusual procedural move Republican leadership ended the vote early before 137 representatives had cast their votes and then “vacated” it (meaning rendering it void). The AP reported that the bill had the votes to pass, but not enough to override a Presidential veto. The vote is now scheduled for the week of Feb. 1, 2016.

Iran held up its end of the deal

On January 16, three days after the called-off vote on the bill, the United States lifted financial and oil sanctions on Iran and released approximately$100 billion in frozen Iranian assets, after Iran was found to have complied with its end of the nuclear deal and dismantled significant portions of its nuclear program. Thus, the potential for Congress to restrict or prevent U.S. sanctions towards Iran — while still existent — has been significantly curtailed.

What the bill would do

The bill would give Congress greater oversight of the Iranian nuclear deal agreed to last year. The nuclear deal was negotiated by the Obama administration but is opposed by the Republican-controlled House and Senate and all Republican presidential candidates. The House voted 269–162 in September against approving the Iran deal, including 25 Democrats. The Senate also voted 56–42 the same way, but the measure still failed because it needed 60 votes to avert a Senate filibuster.

So, now that the Iran agreement went through, this bill was introduced in October by Rep. Steve Russell (R-OK5) as the second-chance means of undoing the deal. Its provisions would include preventing the removal of specific individuals and foreign financial institutions on the Treasury Department’s “restricted list” due to their involvement (or suspected involvement) with Iran’s weapons program or terrorist activities.

The White House issued a veto threat for the bill last week, writing: “By preventing the United States from fulfilling its JCPOA commitments, H.R. 3662 could result in the collapse of a comprehensive diplomatic arrangement that peacefully and verifiably prevents Iran from acquiring a nuclear weapon. Such a collapse would remove the unprecedented constraints on Iran’s nuclear program that we achieved in the JCPOA, lead to the unraveling of the international sanctions regime against Iran, and deal a devastating blow to America’s credibility as a leader of international diplomacy.”

But Rep. Russell, who introduced the bill, said, “These individuals and entities are funding, fomenting, and/or assisting state sponsored terrorism in the region, and all around the world … These entities were placed upon terror sanctions lists for very good reasons. It is important to see who they are, and to be sure that if they are to be de-listed from sanctions, we see the justification to be taken off of these lists.” 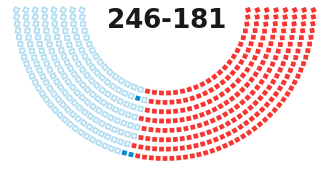