After the September 11, 2001 terrorist attacks, a federal commission was created to fact-find as much information as possible about the planning, funding, and carrying-out of the attacks. The final report ran more than 500 pages, but much intrigue has centered around 28 pages redacted for national security purposes. “60 Minutes” ran an investigative report this month revealing that the pages likely center around how the government of Saudi Arabia -- ostensibly a U.S. ally -- played a significant role in funding and assisting the attacks.

A controversial bill would allow U.S. courts to hold the Saudi government responsible if it is found to have played a role in funding or assisting the attacks. The Justice Against Sponsors of Terrorism Act, S. 2040 and H.R. 3815, has become a major issue in the presidential race over the past week, pitting the Democratic president on the opposite side of the two Democratic candidates, and potentially causing major divides in the U.S.-Saudi partnership.

“The families that lost loved ones on September 11, 2001 deserve the chance to seek long-overdue justice against those responsible for their unspeakable loss,” said Senate sponsor Cornyn. “This legislation will allow families victimized by terrorism to proceed in court against their attackers‎ and hold them accountable for their actions.”

Hillary Clinton announced her support for the bill this week, saying “Wherever the trail may lead, it should be followed. We need justice.”

Presidential candidate Sen. Bernie Sanders (I-VT) is a cosponsor of the legislation. “The families of those lost on that terrible day have the right to review any evidence that connects the hijackers to foreign supporters,” he said. “If no such connection exists, then our country deserves the information necessary to put that speculation behind us.”

Fellow presidential candidate Sen. Ted Cruz (R-TX) is also a cosponsor. Donald Trump does not yet appear to have taken a stance on the legislation, but did say he advocates public release of the 28 redacted pages which are presumed to identify Saudi assistance during the attacks.

The Obama Administration warns that the bill, if passed, could destroy our alliance with Saudi Arabia, one of the few U.S. allies in the Middle East, perhaps the most volatile region of the world. They also say it could put U.S. citizens at risk overseas. Obama made headlines with an interview published in The Atlantic last month, in which he called Saudi Arabia (and a few other nations) “free riders” who rely too much on the U.S. for military assistance.

Saudi Arabia says the move could cause great damage to them economically, forcing the country to sell $750 billion in treasury securities and other assets before they could be frozen by American courts.

Senate Armed Service Committee Chairman Sen. John McCain (R-AZ) said that the bill would alienate Saudi Arabia and undermine a longstanding relationship with a critical U.S. ally in the Middle East, a necessary partner in fighting terrorism and other extremist groups.

The Senate bill passed out of the Senate Judiciary Committee in January, where it now awaits a vote by the full Senate. The House bill has awaited a vote in the House Judiciary Committee since October, but may be pushed up higher on the agenda given its increased newsworthiness this month and President Obama’s visit to Saudi Arabia this week.

GovTrack Insider earlier this year reported on a bill to declassify those redacted pages: S. 1471, the Transparency for the Families of 9/11 Victims and Survivors Act, introduced by former presidential candidate Sen. Rand Paul (R-KY). The bill remains in committee, as it was in February when we reported on it. 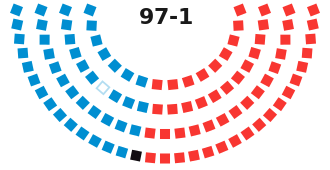