This week, the Senate began debate on the first major energy legislation to be considered since 2007. Introduced by Sen. Lisa Murkowski (R-AK), the bill -- S. 2012, the Energy Policy Modernization Act -- received an unlikely overwhelming bipartisan vote when it passed out of committee 18-4 in September.

In addition, it has the rare accomplishment of being supported by both Senate Majority Leader Mitch McConnell (R-KY) and Senate Minority Leader Harry Reid (D-NV). This is seen by many as a possible indication of bipartisan support to come among the full Senate, especially after the bitterly partisan divide last year over another energy issue: whether to authorize construction of the Keystone XL oil pipeline.

The New York Times wrote that the bill is somewhat watered down in order to achieve this bipartisan support: “It is chiefly focused on modernizing energy infrastructure and improving energy efficiency. It does not include language to drastically increase fossil fuel production, as most Republicans would like, nor does it boldly address climate change, as most Democrats want.”

So what would it do? The bill would create or improve several programs designed to increase energy efficiency in buildings, require significant upgrades to the electrical grid including large-scale storage systems for electricity, expedite liquid natural gas exports, loosen permitting rules for construction of natural gas pipelines on federal lands, provide subsidies for hydropower and geothermal, and permanently authorizing the Land and Water Conservation Fund

While the support may be bipartisan, so is the opposition. The four senators to vote against the bill in committee were Democratic presidential candidate Bernie Sanders (I-VT), Jeff Flake (R-AZ), Mike Lee (R-UT), and Debbie Stabenow (D-MI). The conservative think-tank The Heritage Foundation writes, “The provisions are simply a continuation of government meddling in the energy economy and would waste taxpayer resources, override consumer preference, direct money toward politically preferred technologies, and appease special interests.”

Several environmental groups including the Sierra Club wrote in opposing the legislation, “Several provisions in this bill … we believe could cause detrimental effects to public health and our environment. For example, there is no need to exempt hydropower facilities from regulations that have worked for a century. Some provisions could also have unintended severe consequences for EPA public health protections. We are also troubled by the lack of clean energy investments made by a bill that claims to modernize our energy policy.”

The White House has been cautiously supportive of the bill, but notes that it has some problems with it in its current form. “The administration has concerns with other parts of the legislation including provisions that would: generate budgetary scoring issues associated with energy savings contracts, which represent an important tool in advancing Federal sustainability; repeal existing Department of Energy programs that aim to improve efficiency at manufacturing facilities,” the White House wrote.

Still, says the bill’s lead sponsor Murkowski, “We know we're in a place where our [energy] policies have failed to keep up with changes in the market and advances in technology. This is long overdue."

The Yea votes represented 88% of the country’s population by apportioning each state’s population to its voting senators. 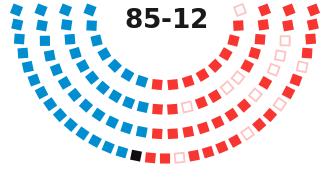