The Transportation, Housing and Urban Development, and Related Agencies Appropriations Act of 2016 is a national spending bill. It has been passed by the House, with a total of 79 amendments proposed and 37 accepted.

Agreed to: Rep. Eleanor Norton (D-DC) proposed an amendment to ban the appropriation of funds by this bill that will violate the 5th Amendment, which grants the right to remain silent, the 14th Amendment, which prohibits government discrimination of rights among citizens, and the Civil Rights Act. Norton said in her press release that this amendment was in response to evident discrimination in urban law enforcement: “Getting this amendment in the THUD bill serves an essential purpose until we can get a permanent authorized version.” Norton introduced the related Racial Profiling Prevention Act on May 15.

Rep. Paul Gosar (R-AZ4) proposed an amendment to ban the appropriation of funds to the Federal Transit Administration’s proposed Rapid Growth Area Transit Program. The program would have spent $500 million on national bus services. Gosar called the program “wasteful” in his press release and claimed that the money would be better spent in the highway trust fund. “Despite millions of dollars continuing to be pumped into utopian projects attempting to recreate a European style transit system, the bottom line is traffic congestion continues to worsen,” he wrote.

Rep. Ruben Gallego (D-AZ7) proposed an amendment to ban the appropriation of funds that would allow the Federal Aviation Administration to redesign the Phoenix Metroplex regional airspace. Phoenix is within Gallego’s district. (Press release)

Rejected: Rep. Tom McClintock (R-CA4) proposed an amendment to ban the appropriation of $155 million to the Essential Air Service, which subsidizes small aircraft in rural areas. “This was supposed to be a temporary program to allow local communities and airports to re-adjust to airline de-regulation in 1978. Not only is it still going on today, it has doubled in cost in the last four years, from $130 million in 2011 to roughly $260 million in 2015,” he said in a press release. The amendment did not receive enough Republican support to pass, with 82 Republicans and all but 8 Democrats voting to reject it. (Vote)

Rep. Scott Garrett (R-NJ5) proposed an amendment to provide just under $17 million to the Federal Railroad Administration’s (FRA) Safety and Operations Account as well as cut $83 million in funding to Capital Investment Grants. The amendment was in response to the recent Philadelphia crash, as well as “over a dozen Amtrak-related accidents,” he said in a press release. The amendment did not receive enough Republican support to pass, with 92 Republicans and all but 11 Democrats voting to reject it. (Vote(https://www.govtrack.us/congress/votes/114-2015/h302))

Rep. Mo Brooks (R-AL5) proposed two amendments to ban the appropriation of funds for federal subsidies to Amtrak. These would have defunded Amtrak’s Operating Grants and Capital Debt Service Grants. Brooks said in his press release that “If you want safety with rail service, probably the best thing to do is to put it in the private sector and eliminate Amtrak altogether.” Both amendments were rejected with a lack of Republican support. The first with 99 opposed Republicans and the second with 101. Neither had more than one supporting Democrat.

Rep. Lois Capps (D-CA24) proposed an amendment to appropriate $28 million to the Pipeline Safety Oil Spill Liability Trust Fund to create new safety rules for pipelines. The amendment was rejected with a vote of 202 to 222. The vote was split along party lines, with only 24 Republicans voting aye and 6 Democrats voting nay.

The Yea votes represented 95% of the country’s population by apportioning each state’s population to its voting senators. 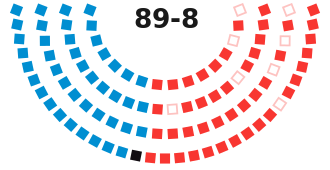