Health care is one of the most contentious and partisan issues on Capitol Hill, but a bill intended to increase competition in the health insurance market passed the House almost unanimously in March.

Most industries are subject to federal anti-trust laws, which prevent any one business within that industry from becoming too large or comprising too much of the market, for fear of price fixing and quality declines for consumers. However, Congress has granted a few exceptions through the years, including for some agricultural cooperatives, labor unions, and even the NFL and NBA for sports leagues. (That’s why there’s only one major football or basketball league in this country.)

Health insurance is one of the few industries granted this anti-trust exemption, going back to a 1945 law. Amid skyrocketing healthcare costs, a bipartisan near-consensus has emerged that this exemption may have outlived its usefulness.

The Competitive Health Insurance Reform Act, H.R. 372, would remove the anti-trust exemption from the health insurance market, once and for all. This would subject insurers to existing federal laws against price fixing and bid rigging, among other things.

Would prices for consumers go down as a result? House sponsors say yes, although the Congressional Budget Office estimated that the effects would be “quite small.” They noted that the bill would result in two countervailing forces: some costs could go down because insurers could no longer price gouge, but some costs could actually increase because insurers could become subject to additional litigation and criminal fines. Overall, the CBO estimated the cost changes as a wash.

Supporters argue that the bill removes an outdated exemption and could help curtail costs in a skyrocketing cost environment for health insurance.

“Making health insurance companies compete in a free-market will result in huge benefits for hospitals, doctors and most importantly, patients,” House lead sponsor Gosar said in a press release. “History has always shown us that when we put the patient first and demand that health insurance companies compete for their business, premiums go down while quality goes up.”

Although only seven House members voted against the bill, some Democrats remain wary of the Republicans’ talking point that the bill “paves the way for repeal and replace of Obamacare.”

The bill attracted 20 House cosponsors, all Republicans, and was approved 416–7 by the House in March. Republicans approved the bill unanimously, while Democrats voted in favor 181–7. The bill currently awaits a vote in the Senate Judiciary Committee. 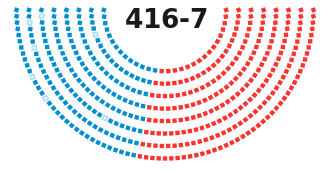