Environmental Protection Agency supporters have had a rough couple of months: a potential 31 percent budget cut, a new administrator who made his name by suing the EPA for overreach, and congressional bills to abolish the agency or at least prevent it from regulating climate change-causing greenhouse gases.

Another bill that passed the House would curtail the ability of the EPA to issue any environmental regulation based upon the science they cite.

What the bill does and what supporters say

The Honest and Open New EPA Science Treatment Act, labelled H.R. 1430 in the House, would prevent the EPA from “proposing, finalizing, or disseminating” any regulation unless the science cited is “the best available science,” “specifically identified,” publicly available online, and reproducible. The legislation was Introduced by Rep. Lamar Smith (R-TX21), chair of the House Science Committee.

Supporters argue the bill increases transparency and prevents the EPA from issuing rules based upon a closed process.

“The American people have a right to see the data that is used to justify EPA’s costly regulations. The HONEST Act requires EPA to base new regulations on sound science that is publically available, and not hidden from the American people,” House lead sponsor Smith said in a press release. “The days of ‘trust me’ science are over. Allowing EPA’s data to be independently reviewed promotes sound science that will restore confidence in the EPA decision-making process.”

Opponents say the EPA’s cited science was never opaque to begin with, that the only reason any science has been hidden is for justifiable reasons such as patient confidentiality. They counter that the real motives behind the legislation are anti-environmental at the behest of the fossil fuel industry bankrolling many Republicans’ campaigns. House lead sponsor Smith’s biggest donors are oil and gas companies.

Ed Yong of The Atlantic gave a real-life example of the type of EPA rule that could be hamstrung by this bill: public health protections based on medical records that are confidential and can’t legally be publicly released.

Rep. Eddie Bernice Johnson (D-TX30), the top Democrat on the House Science Committee, believes a specific nefarious incident caused the legislation to even be written in the first place, as Johnson said in her opening statement on the bill’s markup. In her telling, the committee chairman subpoenaed the EPA to obtain epidemiology data desired by a tobacco industry consultant who had been denied access due to prior misuse.

It now goes to the Senate, where its approval seems quite possible given the anti-EPA tenor of the Republican majority there. The Senate approved 52–46the nomination of Scott Pruitt to lead the EPA in February, and this bill is right in line with Pruitt’s anti-regulatory agenda. 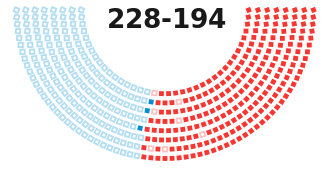