Shootings of police officers have been on the rise recently. Law enforcement fatalities caused by firearms increased 56 percent last year, to their highest level in the past five years. And so far this year, they’re up another 9 percent.

In death penalty cases, so-called “aggravating factors” are elements of the case that would merit a more severe penalty for the defendant. In federal death penalty cases, aggravating factors include the murder victim being a child or a pregnant woman, a hostage situation occurring prior to the murder being committed, or if the murder containing additional “cruel” elements such as torture or rape.

Supporters argue the legislation is a necessary tough-on-crime measure in the face of an escalating threat to public safety.

“America’s police officers and first responders are the first ones on scene to help those in harm’s way,” House lead sponsor Buchanan said in a press release. “These brave men and women and their families put it all on the line and deserve our unwavering support. Getting this bill signed into law will protect those who serve our communities and send a clear message: targeting or killing our first responders will not be tolerated.”

Opponents argue that the bill is worrisome on both civil liberties and criminal justice grounds.

The American Civil Liberties Union wrote in opposition, “Expanding the number of aggravating factors that would subject a person to the death penalty is unnecessary and duplicative, counterproductive to improving law enforcement and community relations, and unlikely to prevent future violence against police.” They argued that the death penalty has not proven an effective deterrent to murder rates, and that all 50 states currently contain the provision on a state level already.

Opponents note that, while any law enforcement officer death is tragic, the current numbers are noticeably lower than they were throughout the 1970s and 1980s. The one-year spike in 2016 may prove an aberration amid a decades-long overall decline.

Opponents also note that the 64 law enforcement officials killed last year, while tragic, was dwarfed by the 963 people killed by police last year, including 233 black people — an issue for which many Democrats contendRepublicans’ have been far more reticent to condemn or to introduce corresponding public policy.

It had not yet received a vote in the Senate. President Trump highlighted the measure approvingly during National Police Week. 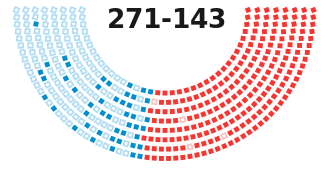