More than half of teens have sent sexually explicit images or “sexted” before age 18–54 percent to be exact, according to researchers at Drexel University. But they should be treated as sex offenders? Many worry that a bill which recently passed the House could do just that.

The Protecting Against Child Exploitation Act, labelled H.R. 1761 in the House, would close a loophole in federal child pornography laws. It would eliminate the requirement that a defendant had “specific intent” to create or distribute child pornography. This stems from a controversial 2015 court decision when a 19-year-old male was able to escape prosecution after having sex with a 7-year-old female neighbor, due to a loophole.

After a photo of the sex act was found on the cell phone of the man, Anthony Palomino-Coronado of Maryland, he was convicted of intentionally coercing a minor into sexual conduct in order to produce a photo. He was sentenced to 30 years in prison. But on appeal, while not denying sex with the child, Palomino-Coronado contended that federal law requires “intent” in order to prosecute for child pornography. He claimed the government had failed to prove that he had sex with a minor in order to take the photos of act.

It might sound like a minor distinction, but the appeals court agreed and reversed his conviction. Noting “It is not enough to say ‘the photo speaks for itself,’” the three-judge panel — while not condoning the act of sex with children — ruled that “The single photo is not evidence that Palomino-Coronado engaged in sexual activity with [the child] _to _take a picture, only that he engaged in sexual activity with [the child] _and _took a picture.”

Supporters argue the bill ensures that those who commit one of the most heinous of all crimes, child pornography, will be punished. They won’t be let loose as a result of “incidentally” rather than “intentionally” creating child pornography.

“”The first responsibility of any just government is to defend the defenseless. Among the most despicable criminals who deserve the full measure of our wrath are those who sexually abuse innocent children,” House lead sponsor Rep. Mike Johnson (R-LA4), who was first elected in November 2016, said in a press release.

“A court-created loophole in federal law allows a predator to ADMIT to sexually assaulting a child in many circumstances and still evade punishment. The Protection Against Child Exploitation Act will ensure any future perpetrators receive the justice they so rightly deserve.”

Opponents fear that the law’s overly broad language could potentially criminalize the behavior of millions of high schoolers who engage in consensual sexting — a practice often seen as something of a rite of passage in the digital age akin to losing one’s virginity.

Every state except North Carolina treats 16- and 17-year-olds as children when punishing for nonviolent crimes. And at least 20 states in the past five years have passed laws explicitly protecting minors from criminal charges when sexting. But this bill would move in the opposite direction, creating a mandatory minimum sentence of 15 years for child pornography — consensual teen sexting included.

“While the bill is well intended, it is overbroad in scope and will punish the very people it indicates it is designed to protect: our children,” Rep. Sheila Jackson Lee (D-TX8) said on the House floor. “[It will also] exacerbate overwhelming concerns with the unfair and unjust mandatory minimum sentencing that contributes to the overcriminalization of juveniles and mass incarceration generally.”

In fact, a mere eight minutes prior to the actual House vote on the bill itself, Rep. Jackson Lee introduced an amendment to guarantee that minors could not be punished as sex offenders, including for consensual teen sexting. The amendment failed 180–238, on an almost completely party-line vote, with all but seven Democrats in support and all but two Republicans opposed.

Key votes and odds of passage

The bill passed the House 368–51 on May 25, after receiving six cosponsors, all Republicans. All but two House Republicans voted in favor: Reps. Justin Amash (R-MI3) and Thomas Massie (R-KY4). Democrats also voted overwhelmingly in favor, though with more dissenting votes: 137–49.

The bill now goes to the Senate, where it has yet to receive a vote in the Judiciary Committee. Given the large margins by which it passed in the House, Senate passage seems probable. 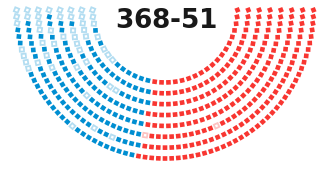