A string of scandals hit the Department of Veterans Affairs in the past few years, including dozens of veterans dying while waiting for care within the required 14 days at VA hospitals, forcing President Obama’s VA Secretary to resign. A new bill that recently passed the Senate aims to crack down on such neglect. Sen. Marco Rubio (R-FL) introduced the Department of Veterans Affairs Accountability and Whistleblower Protection Act, S. 1094, to crack down.

A series of exposes and reports in 2013–14 revealed the extent of neglect and coverup at veterans’ hospitals. They not only showed that veterans were often not getting the care they were entitled to under the law within the amount of time required, but also that staff would falsify reports to mislead and create the impression that everything was fine.

This culminated in an FBI criminal investigation, the resignation of VA Secretary Eric Shinseki, and enactment of legislation. However, many believe that the original legislation enacted did not fulfill its promise. VA employees who have since been caught stealing prescription drug medications, committing armed robbery, and viewing pornography on work computers were not dismissed.

As three Congress members wrote in a joint op-ed for the Military Times, “It was a good step toward reform, but unfortunately, our efforts to ensure accountability were watered down to placate government unions and further weakened by court rulings. Unions have rigged the system, and as a consequence, incompetence and corruption are still prevalent at the VA and few bad employees have been fired.”

This bill aims to close such loopholes through several measures. It allows the VA Secretary to fire incompetent or rule-breaking employees through an expedited appeals process, speeding up a process that has allowed guilty employees to remain on the job for years. It also expands the secretary’s authority to fire lower level staff, not just senior managers as the previous law allowed. And it makes it easier to take away such employees’ pensions or bonuses.

Supporters argue that the bill fixes unintended consequences of the 2014 legislation, and will help ensure that American veterans receive the health care and support they deserve.

“To fully reform the VA and provide our nation’s veterans with the quality care they were promised and deserve, we must ensure the department can efficiently dismiss employees who are not able or willing to do their jobs,” Senate lead sponsor Rubio said in a press release. “We must make real changes that put the well-being of our service members before the best interests of bureaucrats.”

President Trump also supports the legislation. “Senate passed the VA Accountability Act. The House should get this bill to my desk ASAP!” he tweeted. “We can’t tolerate substandard care for our vets.” (Trump used the shorthand name for the bill, presumably to fit within the 140 character limit.)

Trump’s VA Secretary David Shulkin also expressed his support, calling it necessary. “I wish today I could tell you I have the tools to do the right thing, to be able to remove those employees. I do not.,” Shulkin said in a Senate subcommittee hearing. “So unfortunately, I need a new set of tools if I’m going to be held accountable for turning this system around and doing what we all want to do to serve veterans.

The bill passed the Senate on June 6 by a voice vote, meaning no recording of individual votes was made and usually indicating a lack of significant opposition. The original 2014 reform law — the Veterans Access to Care through Choice, Accountability, and Transparency Act of 2014 — passed almost unanimously: by 91–3 in the Senate and 420–5 in the House before being signed by President Obama.

The current bill attracted 39 Senate cosponsors, 31 Republicans and seven Democrats. It next moves to the House. 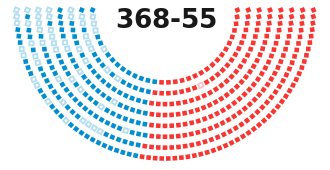