Health care costs are skyrocketing. Total health care spending went from 7.2 percent of GDP in 1970 to 17.8 percent in 2015. The Centers for Medicare and Medicaid Services projects that it will rise further to 19.9 percent by 2025.

Among the causes of this growth are medical malpractice lawsuits, when patients sue doctors, hospitals, or medical groups. A bill that recently passed a key House committee could significantly curtail this practice. But will it come at too great a cost to patients?

A survey from Archives of Internal Medicine found that 91 percent of physicians believe that the medical community practices “defensive medicine.” Under this practice, health care providers conduct additional procedures and tests with little to no medical value, in hopes of avoiding litigation. Defensive medicine costs an estimated cost of $60 billion per year, not to mention the cost of malpractice insurance.

Introduced by Rep. Steve King (R-IA4) as H.R. 1215, the Protecting Access to Care Act would impose a $250,000 cap on damages that could be brought in most medical malpractice lawsuits. Why most? It caps so-called “noneconomic” damages, which include emotional distress, suffering, and mental anguish. Economic damages sought by patients, including health care costs and salary loss, would not be affected by this bill.

Supporters argue that the legislation would counter a critical part of health care cost growth.

“Just imagine what savings would occur if such reforms were attached to all federal health care programs, as this bill would do. This bill goes a long way to respect states’ rights and give states the authority raise or lower the cap for non-economic damages,” House lead sponsor King said in committee.

“It models legislation that began in California, signed by Gov. Jerry Brown. I’m amazed to be advocating for such a policy, but I’m also impressed by the policy and the progress that has been made in the state of California,” King said of the 1975 law that cut defendants’ liabilities by an estimated 30 percent. “Let’s spread that to the rest of America today.”

Opponents counter that claims of malpractice insurance and defensive medicine driving up health care costs are largely a myth, and that this reform bill could harm patients’ rights.

Opponents also note that medical malpractice claims have already been declining even without this bill. Between 2001 and 2013, malpractice costs as a percentage of total health care spending decreased 61.9 percent.

“This bill would cause real harm by severely limiting the ability of victims to be made whole,” House Judiciary Committee lead Democrat Rep. John Conyers (D-MI13) said. “The bill’s $250,000 aggregate limit for noneconomic damages — an amount established more than 40 years ago pursuant to a California statute — would have a particularly adverse impact on women, children, the poor, and other vulnerable members of society. These groups are more likely to receive noneconomic damages in health care cases because they are less able to establish lost wages and other economic losses.”

The bill has attracted three House cosponsors, all Republicans, and was approved by the House Judiciary Committee on a razor thin 18–17 vote.

The only member crossing the party line on either side was Rep. Ted Poe (R-TX2) voting no. Poe has made a point of bucking his party on other health care issues, as this week he left the right-wing House Freedom Caucus due to their refusal to support the now-defunct Republican health care bill, the ultimately-withdrawn American Health Care Act. GovTrack Insider did not hear back after reaching out to Poe’s office for comment about why he didn’t support the Protecting Access to Care Act. 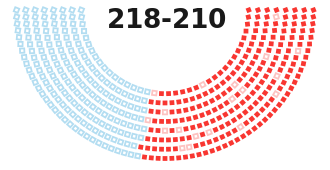 Key:
Republican - Aye Republican - No Democrat - No
Seat position based on our ideology score.