This was a vote to pass S. 114 (115th) in the House. This vote was taken under a House procedure called “suspension of the rules” which is typically used to pass non-controversial bills. Votes under suspension require a 2/3rds majority. A failed vote under suspension can be taken again.

Following the Department of Veterans Affairs scandals of 2014, a popular reform was enacted allowing veterans to bypass the VA for medical care in certain cases. A new law would continue the program — although it had to overcome some obstacles, including a failed House vote in July.

The law continues funding for the Veterans Choice Program, which ensures that veterans can have access to medical treatments and procedures which the VA itself does not provide. In other words, it guarantees veterans can see a private non-VA physician if medically necessary, at government expense.

The program was started in 2014, in the wake of the VA scandals where dozens of veterans died from lack of care and some of the deaths were covered up. This culminating in the resignation of VA Secretary Eric Shinsekiand a series of congressional reforms. One was the Veterans Access, Choice, and Accountability Act of 2014, which passed the Senate with only three dissenting votes and established the Veterans Choice Program.

The program had been set to expire in August, but President Trump signed an extension in April. This law, introduced by Sen. Dean Heller (R-NV) in the Senate as a bill labeled S. 114, provides $2.1 billion in funding for the extension.

President Trump’s proposed budget would increase the VA’s budget by 7 percent, one of the only agencies which would receive an increase rather than a cut. President Obama also significantly increased the VA’s budget and cut the patient backlog, though not eliminating it entirely.

A press release from lead Senate sponsor Heller mentioned several real-life examples of how the law could be used for constituents in his own home state of Nevada.

“Wendell, a Navy veteran from Lovelock, used the Choice Program to get a neck surgery to ensure he could still walk. John, an Air Force pilot from Battle Mountain, used the Choice Program to remove cancer above his neck,” Heller’s office wrote. “The Choice program allowed an Army veteran from Ely to access mental health services nearby as opposed to traveling over 200 miles to Salt Lake City, UT or forgoing the care entirely.

Votes, where it originally failed in the House

Despite passing the Senate on May 25 by unanimous consent, meaning there was no significant opposition and no record of individual votes was recorded, the bill initially failed in the House on June 24 in a vote that surprised many.

Why? Because House Republicans made changes that would pay for the Veterans Choice Program by diverting funds from elsewhere in the VA, a move that most Democrats and even a few Republicans opposed.

Democrats almost entirely opposed it 2–182, while four Republicans also opposed. The bill received 219–186 support overall, but at 54 percent, that fell short of the two-thirds required.

Four days later on July 28, with the controversial provisions now removed, the bill passed the House by a unanimous 414–0.

It was signed into law by President Trump as Public Law 115–46. 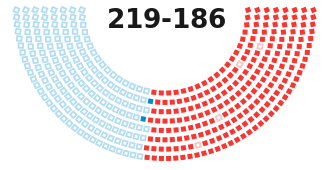