Should the government be able to deport or detain immigrants who are suspected of gang membership, even if they haven’t been convicted of — or even arrested for — a crime?

A bill that passed the House last week would allow the government to do just that.

The Criminal Alien Gang Member Removal Act (H.R. 3697) would prevent non-Americans suspected of gang activity from coming to the U.S. It would also allow for the deportation or detainment of immigrants already here who are suspected of gang involvement.

Last fiscal year, Immigration and Customs Enforcement (ICE) removed more than 2,000 suspected gang members from the country, but only after they were convicted of another crime. This legislation would allow for their potential removal prior to that.

Supporters argue the bill is a necessary public safety measure in response to the rise of gangs comprised largely of immigrants. Supporters in particular often reference a primarily-immigrant gang called MS-13, which traces its origins back to the 1980s but has become more prevalent in the U.S. recently, to the point that President Trump mentioned his plans to “eradicate” them in a summer speech.

“In Northern Virginia there have been at least eight brutal murders tied to the transnational MS-13 gang since last November,” House lead sponsor Comstock said in a press release. “That is unacceptable, and this legislation will help get these violent gang members off our streets. MS-13 preys upon and intimidates those who have come to our country to seek a better life.”

That number Comstock cites of eight murders in her home region of northern Virginia appears to be accurate — if not actually an understatement, since the statistic was from May. The numbers are even worse in some other regions, such as at least 17 murders committed by the gang in Long Island.

Opponents argue the bill, by allowing the deportation of people not even accused of a crime, violates the “innocent until proven guilty” axiom of the American legal system and violates the right to association (in this case association with gangs) provided in the First Amendment.

While nobody on either side of the aisle disputes that immigrants who become convicted murderers should get deported, mere association with gangs — or even hearsay suspicion of gang involvement — is a different story.

“H.R. 3697 seeks to deport immigrants based on a mere “reason to believe” that they have been involved in gang activities. This overly broad designation could sweep up individuals who have not engaged in criminal activity,” the ACLU continued in their statement. “Indeed, in many cases, H.R. 3697 could make immigrants deportable for activities protected by the First Amendment.”

After attracting six Republican cosponsors, It passed the House on September 14 by a vote of 233–175, a mere week after the bill was introduced.

Only 11 Democrats voted in favor, five of whom represent states that border Mexico. Only one Republican voted against: libertarian-leaning Rep. Justin Amash (R-MI3).

The bill now goes to the Senate Judiciary Committee. Skopos Labs rates it as a 32 percent chance of enactment. President Trump has indicated he would sign the bill if it passes the Senate.

“This bill provides law enforcement with the tools they need to improve domestic security and restore public safety by denying criminal alien gang members admission to the United States,” the White House said in a statement. “President Trump has always made the safety of Americans his highest priority, and encourages the Senate to take quick action and pass this bill.” 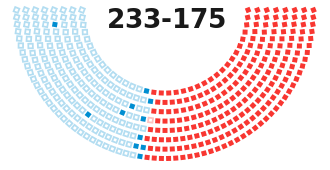