Should somebody lose their taxpayer-supported benefits if they have an outstanding warrant --- even if they haven't actually been convicted of the crime?

The Control Unlawful Fugitive Felons Act (CUFF), which passed the House in September, would do just that.

The legislation would discontinue Social Security and retirement benefits for any person subject to an outstanding warrant or parole violation.

The bill would overturn a 2009 California District Court ruling, which forced the Social Security Administration to resume such payments after the agency had previously denied them. This bill would deny them once again.

It only applies to those people facing federal or state felony charges subject to at least one year in prison, so misdemeanor charges would be exempt --- good news if you haven't paid that parking ticket yet.

The bill would save taxpayers an estimated $2.1 billion over the next decade, according to the nonpartisan Congressional Budget Office.

Supporters argue the bill would close a provision that allows criminals to receive governmental support from law-abiding citizens.

"Hardworking taxpayers should not have to pay people who are fleeing from the law. Not only is it unfair to ask taxpayers to do so, but it's self-defeating to subsidize someone's prolonged flight from justice," Noem said in a press release.

"Through the CUFF Act, wanted felons and parole violators would no longer have access to certain Social Security benefits, protecting taxpayers and helping law enforcement apprehend those who have committed the most serious of felonies, including murder, rape, and kidnapping."

Opponents counter that the bill is a ruse, with more sinister aims of undercutting the social safety net for many more people than proponents claim.

"I reject proponents' claims that this bill only targets fugitive felons. In reality, _current _law terminates benefits for fugitive felons," Rep. Danny Davis (D-IL7) said on the House floor. "This bill strikes the current restriction against fugitive felons and instead expands the benefit cutoff beyond those who are actually fleeing to encompass everybody who had some unresolved run in with the justice system based on allegation, not conviction."

Opponents also worry the law could lead to false positives, which could undermine the innocent until proven guilty maxim of the American legal system.

"In 2008, Rosa Martinez lost her SSI benefits, which were her sole source of income, because of a 1980 arrest warrant for a drug offense in Miami, Florida --- even though she had never been to Miami, never been arrested, never used illegal drugs, and is eight inches shorter than the person identified in the warrant," Davis said.

"It was only after filing a lawsuit that Ms. Martinez was able to receive her benefits. Her court case, Martinez v. Astrue, led to the termination this policy that the Majority is trying to reinstate."

The bill passed the House on September 28 by a 244--171 vote.It now goes to the Senate Finance Committee.

A previous version introduced in 2015 never received a House vote at all. Interestingly, that was despite receiving more House cosponsors then than the current version has accumulated now. 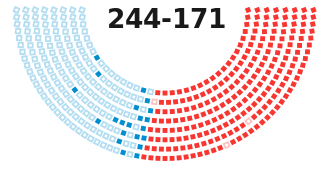