Next week, the House will vote the Pain-Capable Unborn Child Protection Act, which would ban abortions after 20 weeks of pregnancy.

It’s passed the House in both of the past two sessions of Congress, but now with complete Republican control of Congress and the presidency, the bill’s odds of passage seem higher than ever.

The legislation, would criminalize the performing of an abortion once the fetus is 20 weeks, the approximate point at which advocates estimate a fetus can begin to feel pain.

Twenty states already have a version of the 20-week abortion ban on the books. Approximately 1.3 percent of abortions are performed after 20 weeks.

Penalties would include up to five years in prison.

Exceptions are made in cases of rape, incest, or to protect the life of the mother. Critics note that cases of rape or incest are often very difficult to definitively prove while in utero.

The bill only targets those who perform the abortions, such as doctors, OBGYNs, and Planned Parenthood employees. The bill specifically exempts the actual women who undergo (or attempt to undergo) an abortion from prosecution.

Introduced by Rep. Trent Franks (R-AZ8) and labelled H.R. 36 in the House, it was introduced on the very first day of this Congress in January.

Supporters argue the bill would preserve the sanctity of life while a child is in the womb.

“[The bill] will protect the voiceless, the vulnerable, and the marginalized. It will protect those children who science has proven can feel pain, and give them a chance to grow and live full and happy lives,” House Majority Leader Rep. Kevin McCarthy (R-CA23) said in a statement announcing he would bring the bill to a vote next week.

“We have an obligation to speak and defend for those who can’t speak for themselves. When children can feel pain, when you can see their noses and ears, when you can hear their heartbeats and feel their movement — at the very least we can all agree these children should be protected.”

Opponents counter the bill would violate a woman’s right to choose, is probably unconstitutional by violating Roe v. Wade, and many also dispute the finding that a fetus can feel pain at 20 weeks.

“Women should be able to make their own choices about their bodies and their health care, and Government should not inject itself into decisions best made between a woman and her doctor,” the Obama White House wrote in their official veto threat of the 2015 version of the legislation.

“Not only is the basis for H.R. 36 scientifically disputed, the bill disregards women’s health and rights, the role doctors play in their patients’ health care decisions, and the Constitution.”

The bill has passed the House twice before.

A 2013 version passed by a 228–196 vote. Six Democrats voted in favor and six Republicans voted against. But that version never received a vote in the Senate, then controlled by Democrats.

A 2015 version passed by a slightly larger 242–184 vote. That time there were fewer party defections, as four Democrats voted in favor while four Republicans voted against.

Republicans controlled the Senate by then, allowing a vote on the bill in that chamber. While it technically received more “yes” votes by a 54–42 margin, it fell short of the 60 votes needed to move forward. Three Democrats voted in favor and three Republicans voted against.

(Even if that version had passed the Senate, it would have faced a certain veto from President Obama.)

The bill has attracted 169 cosponsors, two of whom are Democrats. It awaits a vote in the House Judiciary Committee, but McCarthy announced this week that he would bring the bill up for a vote in the full House next week.

House passage seems almost guaranteed, considering it passed the House in both 2015 and 2013. The Senate is more uncertain despite the Republican majority there, since Democrats still possess sufficient numbers to filibuster while a few of the most centrist Senate Republicans might oppose the bill. This year’s several iterations of attempted Affordable Care Act (Obamacare) repeal, all of which failed in the Senate, might be a bad omen in that respect.

But if it does pass both the House and Senate, President Trump seems very likely to sign it. He signed an executive order disallowing federal funds to groups abroad that perform abortions, while his proposed budget eliminates all federal funds to Planned Parenthood.

Even if enacted into law, it’s possible the bill could be ruled unconstitutional by the courts for violating Roe v. Wade — although it’s also possible that with one more conservative Supreme Court justice Roe v. Wade could be overturned, theoretically as soon as 2018. 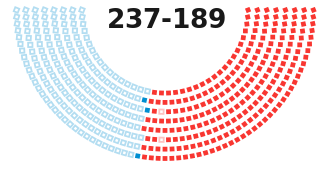