H.R. 7: No Taxpayer Funding for Abortion and Abortion Insurance Full Disclosure Act of 2017

Permanently banning federal funding for abortions is a top Republican social policy priority. H.R. 7, the No Taxpayer Funding for Abortion and Abortion Insurance Full Disclosure Act, passed the House last month and would accomplish that goal. H.R. 771, the EACH Woman Act, would do the opposite and permanently repeal the ban.

What the Republican and Democratic bills each do

Every year since 1976, Congress — regardless of party control — has passed the Hyde Amendment, which prevents federal money from being used to perform abortions, even as abortions themselves remain legal. But the policy has never been extended permanently. The bill introduced by Rep. Chris Smith (R-NJ4) would do just that.

It also prevents federal subsidies for any health care plans that include abortion coverage — with the exceptions of rape, incest, or to save the life of the mother. It prevents abortions at facilities or locations owned or operated by the federal government. Finally, it prohibits tax credits or subsidies under the Affordable Care Act — more commonly known as Obamacare — from being used for health plans that include elective abortion coverage.

The Equal Access to Abortion Coverage in Health Insurance (EACH Woman) Act would do the reverse, and permanently ban the Hyde Amendment. As a press release from the sponsoring House Democrats explained, “This legislation would end the discriminatory Hyde Amendment, which disproportionately affects low-income women and women of color. The EACH Woman Act would ensure that all women, regardless of income, insurance or zip code, can make personal reproductive health care decisions without interference from politicians.”

Between the time abortion was made legal nationwide in 1973’s Roe v. Wade to when the Hyde Amendment took effect in 1980, the federal program Medicaid paid for about 300,000 abortions per year.

Who supports the No Taxpayer Funding for Abortion Act

Republicans, argue that abortion is murder and accordingly no federal funding should be used for the practice even as it remains constitutional (for now).

“Two million people who would have been aborted instead survived because public funds were unavailable to effectuate their violent demise,” lead House sponsor Smith said in a statement. “Two million survivors have had the opportunity to live and enjoy the first and most basic of all human rights — the right to life.”

Republicans are doing everything they can to ban abortions, from President Trump’s executive order last month to ban U.S. funding for abortions performed or promoted overseas, to a congressional plan to strip abortion provider Planned Parenthood of its federal funding in a budget bill.

Who supports the EACH Woman Act

Democrats argue that the federal government should help fund abortions, a practice which has been constitutional for decades and which can sometimes be life-saving — especially because poor women (disproportionately of color) might lack access to the procedure otherwise.

“At a time when Congressional Republicans, led by President Donald Trump, are trying to roll back basic reproductive freedoms, our diverse coalition is standing up for women and families,” House lead sponsor Rep. Barbara Lee (D-CA13) said in a statement. “My legislation would ensure that every woman can make the decision that is right for herself and her family, regardless of her income or where she lives. Politicians don’t belong in the exam room, plain and simple.”

When the House passed the No Taxpayer Funding for Abortion legislation a few years back, Democrats noted that the 22 Judiciary Committee Republicans who voted to advance the bill out of committee were all men. Similarly, some noted the all-male group standing behind President Trumpas he signed an executive order banning taxpayer funds to NGOs that provide abortions.

GOP bill had passed House before, not Senate or White House

The House passed the No Taxpayer Funding for Abortion Act in the previous two sessions of Congress. In 2014, it passed 227–188, with only six Democrats in favor and one Republican against: Rep. Richard Hanna (R-NY22). It didn’t receive a vote in the Senate, which was controlled by Republicans at the time.

In 2015 the House passed it again by an even larger 242–179 margin, with only three Democrats in favor and Hanna the lone Republican against. It’s unclear why the Senate, then controlled by Republicans, never voted on the legislation — especially considering it achieved 43 Senate cosponsors.

This year the legislation passed the House on January 22 by 238–183, a slightly lower margin than last time around. Three Democrats voted in favor: Reps. Daniel Lipinski (D-IL3), Henry Cuellar (D-TX28), and Collin Peterson (D-MN7). In a show of party unity, no Republicans voted against. (Hanna, the lone Republican against during the past two House votes, has since retired.)

So the real questions now are: will the Senate pass it and will the President sign it?

The White House issued a Statement of Administration Policy on the bill, writing, “This bill would continue to prohibit the Federal government from paying for affected procedures with the taxes of Americans who find abortion morally or religiously objectionable. If the President were presented with H.R. 7 in its present form, he would sign the bill.”

The EACH Woman Act is dead on arrival in the Republican-controlled Congress, despite attracting 109 Democratic cosponsors. 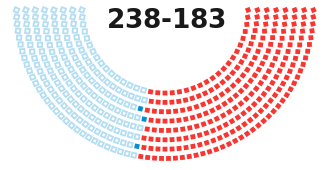