This was a vote to kill H.Res. 646, a resolution impeaching President Donald Trump.

Green’s resolution, H.Res. 646: Impeaching Donald John Trump, President of the United States, of high misdemeanors, is not the first impeachment resolution against the President introduced this session. In July, Rep. Brad Sherman (D-CA30) introduced H.Res. 438 and in November, Rep. Steve Cohen (D-TN9) introduced H.Res. 621. However, both Sherman and Cohen focused on the crimes side of “high crimes and misdemeanors” and argued for impeachment based on what they believed to be the President’s obstruction of justice with respect to investigations relating to the Russian’s government’s role in the 2016 election and subsequent administration actions.

Green, on the other hand, focused on the misdemeanors side arguing that the President’s apparent support of white supremacy in a variety of policies, press conferences and via Twitter causes harm to the United States. In a letter to colleagues, he argued that the framers of the Constitution intended to provide Congress with a method for removing any President who does so. Green’s resolution, had it passed, would have impeached the President for being, in Green’s words, openly and explicitly racist.

The resolution accuses the President of

The articles of impeachment make two primary points: the first is that President Trump’s bigotry causes greater and less easily eradicated harm than obstruction of justice because while crimes have specific punishments, poisoning public discourse and sowing discord do not. The second is that impeachment does not require a crime. He notes that article 10 of Andrew Johnson’s articles of impeachment reads:

If Andrew Johnson could be impeached for his public behavior when it disgraced the office of the Presidency, then Green believes President Trump can and should be as well.

Both the Democratic leadership and the White House opposed these articles of impeachment. Rep. Nancy Pelosi (D-CA12), the House Minority Leader, said that impeachment should not move forward until or unless there is evidence of crimes. The White House, as one might expect, does not believe that President Trump is a bigot or that he has disgraced the office. Raj Shah, a White House spokesperson, told Politico “It’s disappointing that extremists in Congress still refuse to accept the President’s decisive victory in last year’s election…Their time would be better spent focusing on tax relief for American families and businesses, and working to fund our troops and veterans through the holiday season rather than threaten a government shutdown.”

The vote against the resolution was decisive, losing by 364–58. Neither of the other resolutions of impeachment introduced this session have gone anywhere either — — nor are they expected to.

Another open question is the definition of what constitutes an impeachable offense. In 2014 and 2015, bills were introduced to define impeachable offenses. Both sponsors were Republicans, but while the 2015 resolution seemed to be tailored to President Obama, the 2014 resolution was tailored to whoever won the 2016 election and appeared to be addressing at least as many actions of the Bush Administration as the Obama Administration. These too never went to committee or received votes.

This vote was related to a resolution introduced by Rep. Al Green [D-TX9] on December 6, 2017, H.Res. 646 (115th): Impeaching Donald John Trump, President of the United States, of high misdemeanors.. 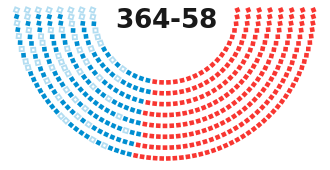