2017 has been the deadliest year for mass shootings in U.S. history. At least 112 people have been killed so far this year in mass shootings, such as the tragedies at a country music concert in Las Vegas and outside a church in Sutherland Springs, Texas.

Amid progressives’ calls for stricter gun control, Congress has gone in the opposite direction, as the first gun-related bill to pass in a chamber of Congress since those massacres was the Concealed Carry Reciprocity Act.

(Technically the bill only allows the reciprocity for “other states that recognize their own resident’s right to concealed carry.” But all 50 states allow at least some form of it, even as some of the most left-leaning states have particularly restrictive variations on the practice.)

The legislation was introduced in the House in January as H.R. 38 by Rep. Richard Hudson (R-NC8), and in the Senate in February as S. 446 by Sen. John Cornyn (R-TX).

Supporters say the legislation ensures that a constitutionally-guaranteed right is held constant throughout the nation. They contend this is no different than how a driver’s license or a marriage is honored in all 50 states.

“Our Second Amendment right doesn’t disappear when we cross state lines, and this legislation guarantees that,” Hudson said in a press release. The bill “is a common sense solution to a problem too many Americans face. It will provide law-abiding citizens the right to conceal carry and travel freely between states without worrying about conflicting state codes or onerous civil suits.”

The bill “uses the Commerce Clause, a constitutional provision both parties abuse when trying to increase the size and scope of the federal government, to expand federal authority over concealed carry permits. The Second Amendment, not the Commerce Clause, secures our right to keep and bear arms,” the House Liberty Caucus wrote in a letter opposing the bill.

“H.R. 38 expands federal power over a right that ‘shall not be infringed,’” the letter continued, “and, by using the Commerce Clause, it sets a dangerous precedent that future Congresses may use to expand regulations on firearms.”

The legislation passed the House on December 6 by a 231–198 vote. Six Democrats voted in favor, while 14 Republicans voted against. It had first attracted 213 cosponsors: 210 Republicans and three Democrats.

It now goes to the Senate, although they do not plan to take up the bill until spring 2018. The version introduced in the Senate has attracted 39 of the 52 Senate Republicans as cosponsors, although one does not need to cosponsor legislation in order to ultimately vote for it.

A 2013 Senate vote on the measure received more ‘aye’ than ‘nay’ votes, by a 57–43 margin, but needed 60 votes to pass. 13 Senate Democrats voted in favor at the time, and seven of them are still in office.

However, _McClatchy _confirmed through interviews that most of those Senate Democrats who once voted in favor are now opposed, due to a combination of escalating mass shootings and a greater consensus within the Democratic Party over the past few years. That near-lack of bipartisan support would make it significantly more difficult for the measure to overcome a possible Senate filibuster. 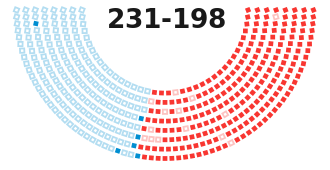