H.J.Res. 42: Disapproving the rule submitted by the Department of Labor relating to drug testing of unemployment compensation applicants.

One of the most controversial bills in this Congress split the two parties so much that the Senate vote produced no Republicans opposed and no Democrats in favor. And it could potentially kick a large number of people around the country off of unemployment insurance or food stamps.

The context and what the law does

Then, the Middle Class Tax Relief and Job Creation Act of 2012 — passed by a Republican House compromising with President Obama — allowed states to drug test unemployment claimants under specific narrow circumstances. At least 15 states subsequently did so. Drug testing for food stamps remained illegal, but a number of Republican-led states passed laws to do so anyway, though they’d all been blocked by courts.

Supporters argue the bills are necessary to prevent safety net or welfare programs from being abused by hardcore drug users, especially since drug use is a violation of the law. Since these programs are also largely run by the states, they call this a victory for states’ rights while contending that the previous rulings were judicial overreach by Democrats.

“After 5 years of battling with the Obama Department of Labor, states like Texas will now be allowed to drug test folks on unemployment to ensure they are job ready from day one,” House lead sponsor Brady said in a press release. “This is a win for families, workers, job creators, and local economies.”

President Trump agreed. “The [previous] rule imposes an arbitrarily narrow definition of occupations and constrains a State’s ability to conduct a drug testing program in its unemployment insurance system,” the White House wrote in a statement accompanying the president’s signature.

Opponents note that in states which have already passed such measures, only a miniscule number of drug users were actually caught. Six of the seven states analyzed by ThinkProgress found a drug use rate of lower than 1 percent. Many opponents also contend that those suffering from drug addiction should be helped or funneled into treatment, rather than be stripped of what for many is their only lifeline for food and income.

The bill’s passage into law

The legislation Introduced by two Congress members from Texas: Rep. Kevin Brady (R-TX8) in the House and Sen. Ted Cruz (R-TX) in the Senate. The House bill attracted 35 cosponsors, all Republicans, although the Senate bill only attracted one cosponsor.

It passed the House on February 15 by a 236–189 vote. Only four Democrats supported: Reps. Jim Cooper (D-TN5), Daniel Lipinski (D-IL3), Collin Peterson (D-MN7), and Kurt Schrader (D-OR5). Only one Republican opposed: Rep. Ileana Ros-Lehtinen (R-FL27), who represents a district that voted for Hillary Clinton at the highest margin of any congressional Republican. GovTrack Insider reached out to Rep. Ros-Lehtinen’s office to ask about her vote, but did not hear back.

It then passed the Senate on March 14 by a 51–48 vote. That time was even more party line, with zero Democrats in favor and zero Republicans opposed. President Trump signed it into law on March 31, turning the House’s H.J.Res. 42 and the Senate’s S.J.Res. 23 into Public Law 115–17. 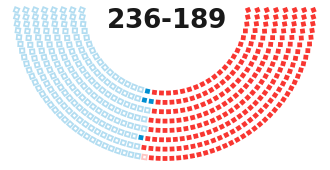