On the Decision of the Chair PN55: Neil M. Gorsuch, of Colorado, to be an Associate Justice of the Supreme Court of the United States

This was the "nuclear option" vote, the second of four significant votes on the nomination of Neil Gorsuch to be a Supreme Court Justice. In this vote, the Senate changed its rules for cloture votes on Supreme Court nominations from requiring a 3/5ths threshold of elected senators to a simple majority vote.

Why the vote was taken

A vote on cloture is a vote to limit further debate and move to an up-or-down vote, in other words to prevent a filibuster. In a previous vote, cloture on Gorsuch's nomination failed the 3/5ths threshold. In this vote the Senate changed its rules so that a subsequent cloture vote would succeed.

Sen. Mitch McConnell, the Majority Leader, raised a point of order that the Senate's rules change on November 21, 2013 set the requirement for cloture votes to "a [simple] majority vote on all nominations." The rules change by the Democrats on November 21, 2013, following numerous Republican filibusters of President Obama's nominations, in fact only changed the cloture requirement from 3/5ths to a simple majority for presidential nominations except Supreme Court Nominations. (It also did not change the threshold for filibusters on bills.) McConnell raised the point of order strategically, knowing that his point of order would be ruled against by the chair, so that he could force a vote.

The chair ruled against McConnell.

What yea and nay mean

In this vote, the Senate is voting on the ruling of the chair. A vote in favor was a vote to keep the chair's ruling that the November 21, 2013 rules change did not apply to Supreme Court nominations. A vote against was a vote to adopt McConnell's contention in the point of order. Although the chair's ruling was an accurate understanding of the November 21, 2013 rules change, this vote was intended as a means to change the Senate's rules going forward. The vote required a simple majority.

The vote failed, meaning the chair's ruling was overruled by the senators present, and McConnell's statement was adopted as the Senate's new rule. The new rule is that cloture votes on all presidential nominations require a simple majority to succeed, rather than the old rule of 3/5ths of elected senators (prior to November 21, 2013 for all cloture votes, and after just for Supreme Court nominations). The threshold for cloture votes on legislation remains at 3/5ths.

In the subsequent Senate vote #110, the failed cloture vote was retaken under the new rule. Gorsuch was confirmed in the final vote the following day.

The Nay votes represented 45% of the country’s population by apportioning each state’s population to its voting senators. 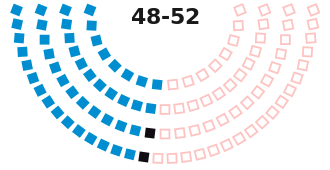