It’s no secret that the President and congressional Republicans want to repeal the Affordable Care Act, better known as Obamacare. Their main method of preparing to do so is Senate Concurrent Resolution 3 which passed the Senate and House in early January 2017.

What the resolution does

Introduced by Sen. Mike Enzi (R-WY), Chair of the Senate Budget Committee, the primary reason it gained attention is as the main congressional blueprint for Republicans to repeal the health care law. And passage of this concurrent resolution allows for a procedure called reconciliation, which prevents a bill from getting filibustered and restricts the number of bill amendments which can be offered. (The bill’s legal purpose is actually to set the congressional budget level for the upcoming fiscal year, as well as intended budget levels for the subsequent 10 fiscal years. More on that later.)

It also requires the relevant committees in both the Senate and House to introduce repeal legislation by Friday, January 27. Attempts by some Republicans to move back that date, in some cases by several months, ultimately failed. Concerns are rising as the party has yet to coalesce around a replacement plan, with Trump saying he won’t reveal the specifics of his administration’s plan until his Secretary of Health and Human Services is confirmed, while several competing Republican replacement plans introduced by members of Congress jockey for frontrunner status.

A concurrent resolution is a type of congressional legislation that does not need a presidential signature because it does not have the force of law.

Supporters argue the resolution is a necessary move to get rid of a law that they contend has removed freedom of choice in doctors and insurance plans, burdened the economy through skyrocketing premiums, and interfered unnecessarily with the American medical system.

“Congressional approval of this resolution is an important first step in building a bridge from Obamacare’s broken promises to better health care for all Americans,” lead sponsor Enzi said in a statement. “This resolution will help provide relief from Obamacare that millions of Americans have long demanded, while also ensuring a stable transition in which those with insurance will not lose access to their health care coverage.”

Opponents argue the health care law has dramatically lowered the uninsured rate, saved lives, and that the replacement would likely leave many people even worse off than the status quo.

“The vote taken in Congress today is nothing short of irresponsible. It puts in jeopardy the lives of millions of Americans just for the sake of a political victory,” Rep. Norma Torres (D-CA35) said in a statement shortly after the House vote. “For years, we have heard Republicans talk about repealing and replacing, but to this day we have not seen a single workable plan to replace the ACA.”

The vote count, and why some Republicans voted against

The resolution passed the Senate 51–48, with no Democrats in favor and only one Republican against: Sen. Rand Paul (R-KY). Make no mistake, it’s not because Paul supports the Affordable Care Act, but because he felt the legislation didn’t go far enough in balancing the budget overall. “Putting nearly $10 trillion more in debt on the American people’s backs through a budget that never balances is not the way to get there,” Paul said in a statement after the vote. “It is the exact opposite of the change Republicans promised, and I cannot support it, even as a placeholder.”

The resolution then passed the House 227–198. Similar to the Senate vote, no Democrats were in favor and nine Republicans voted against. Similar to Sen. Paul, many of the nine are Freedom Caucus members who argue the legislation did not go far enough. Rep. Tom Price (R-GA6), Trump’s pick to lead the Department of Health and Human Services, recused himself from the vote.

As mentioned earlier, the actual overall purpose of the bill — besides just the health care repeal element earning the most notoriety — is to set federal budget levels. Although these are subject to change, under the legislation the upcoming fiscal year would have a total budget of $3.3 trillion. This amount would rise each year, up to $4.9 trillion a decade from now.

Federal revenues, meanwhile, would total $2.7 trillion in this upcoming fiscal year. That figure too would rise each year, up to $3.9 trillion a decade from now.

Every single year, federal outlays would surpass federal expenditures, creating deficits and adding to the national debt. The deficit would total $582 billion in the upcoming fiscal year, rising in most — though not all — of the subsequent years, until totalling $1 trillion a decade from now.

The Yea votes represented 44% of the country’s population by apportioning each state’s population to its voting senators. 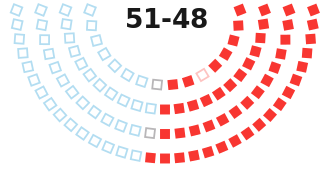