S. 84: A bill to provide for an exception to a limitation against appointment of persons as Secretary of Defense within seven years of relief from active duty as a regular commissioned officer of the Armed Forces.

Secretary of Defense James Mattis, appointed on President Trump's first day in office, was a four-star Marine general. Mattis’s recent service upends the traditional separation where the Defense Secretary — the official in charge of the Pentagon and most of the American military — is a non-uniformed civilian, while the Chairman of the Joint Chiefs of Staff is the the nation’s top-ranking military official.

To maintain that separation, Congress passed a law decades ago stipulating that nobody can serve as Defense Secretary within seven years after leaving the service. Mattis has only been out of the service for just shy of four years.

A law enacted on the President’s first day in office, S. 84, granted Mattis a waiver from the law.

The bill was introduced by Senate Armed Services Committee Chair John McCain (R-AZ). The legislation doesn’t do away with the “seven years out” requirement. It just creates a one-time waiver for Mattis specifically. (Technically the legislation refers to “the first person appointed… as Secretary of Defense after the date of the enactment of this Act,” but in practice everybody knows that’s clearly referring to Mattis.)

This was only the second time such a waiver had ever passed, following the1950 waiver for George Marshall’s appointment in the middle of the Korean War. A number of other Defense Secretaries had served in the military, buthad been retired long enough by the time of their appointment that they already met the qualification under law.

Supporters say Mattis is a qualified candidate during a time of great national security and defense challenges for America, who commands bipartisan support and deserves to be confirmed without delay.

“I have had the privilege of knowing General Mattis for many years. He is without a doubt one of the finest military officers of his generation and an extraordinary leader who inspires a rare and special admiration of his troops,” McCain said in a statement after the nomination was announced. “General Mattis has a clear understanding of the many challenges facing the Department of Defense, the U.S. military, and our national security.”

(McCain was rumored to be a possible Defense Secretary pick himself had another Republican candidate for president won the election, but not for President Trump who had declared McCain, a former prisoner of war, “not a war hero” and did not initially endorse McCain’s 2016 Senate reelection bid.)

The bill passed, but why the lone Mattis dissenter voted no

The waiver bill passed 81–17 in the Senate, with Senate Republicans unanimously supporting while even Senate Democrats largely supported it 30–16. The House passed it later that same day 268–151, with all but one Republican — Rep. Justin Amash (R-MI3) — in support. Unlike for their Senate counterparts, however, House Democrats largely opposed the measure, voting strongly against by 36–150.

With the waiver passed, Mattis was confirmed on what many considered a surprisingly bipartisan vote, 98–1. The lone dissenter was Sen. Kirsten Gillibrand (D-NY), who had previously written in a New York Times op-ed: “Our American democracy was built around the concept of civilian control of the military… New presidents are typically allowed latitude to appoint their cabinet members. But President-elect Trump is not entitled to ignore our laws and change the fundamental government constructs that have enabled our country’s success.” 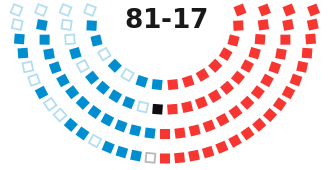