On the Nomination PN43: Mike Pompeo, of Kansas, to be Director of the Central Intelligence Agency

This vote confirmed Rep. Mike Pompeo (R-KS4), a three-term Congressman first elected in 2010, as Director of the Central Intelligence Agency.

Rep. Mike Pompeo (R-KS4), a three-term Congressman first elected in 2010, was President-elect Donald Trump’s nominee to serve as CIA Director. What bills had Pompeo introduced and how had he voted in Congress on issues related to international affairs, law enforcement, national security, and other issues he’ll face as CIA Director?

Pompeo served on the House Intelligence and House Energy and Commerce Committees. He ranked among the upper half of House Republicans ranked by conservatism, according to GovTrack’s ideology score. His position required Senate confirmation.

Guantanamo Bay. President Obama has long pledged to close the Cuba prison where the U.S. has an agreement to detain suspected terrorists, calling it a black mark on U.S. foreign policy due its human-rights abuses and violation of the Geneva Conventions. Pompeo — along with all but four Republicans — voted for H.R. 5351, to prevent the Obama Administration from transferring any more of the current prisoners out of Guantanamo. The bill passed the House but has not yet received a vote in the Senate.

NSA surveillance and Edward Snowden. The Obama Administration hascharged NSA whistleblower Edward Snowden, currently living in exile is Russia after his U.S. passport was revoked, under the Espionage Act for unauthorized communication of national defense information. However, the Administration has not devoted resources to capturing him in Russia or forcing his extradition to the U.S. Pompeo has called Snowden a “traitor” who should be given the death penalty.

Pompeo did vote in favor of the bipartisan USA Freedom Act in May 2015, the NSA reform bill that imposed limits on wiretapping and switched metadata of digital communications from being stored by the government to being stored by the tech companies themselves. Snowden’s disclosures werewidely credited as the impetus for the legislation. However, much of Pompeo’s bill called the Liberty Through Strength Act II would nullify those provisions.

Torture. On his first full day in office, President Obama signed an executive order banning the use of torture (or “enhanced interrogation”) on terrorist suspects or detainees. Pompeo disagreed, writing: “These men and women are not torturers, they are patriots. The programs being used were within the law, within the constitution, and conducted with the full knowledge of [Congress]. If any individual did operate outside of the program’s legal framework, I would expect them to be prosecuted to the full extent of the law.” Trump has promised to restore waterboarding — the most infamous of the torture techniques used during the George W. Bush administration — “and a hell of a lot worse.” Pompeo would seemingly agree.

Terrorism as grounds for loss of citizenship. Pompeo cosponsored H.R. 503, the Expatriate Terrorist Act, which would for the first time include serving in or aiding a terrorist organization as grounds for loss of U.S. citizenship. Critics worry that the bill could run afoul of the Supreme Court decision in 1967’s Afroyim v. Rusk, which found that an individual’s express voluntary renunciation is the only constitutionally valid grounds for revoking American citizenship. The bill has attracted seven cosponsors, all Republicans, but has not yet received a vote in the House Judiciary Committee.

Vetting refugees. Pompeo cosponsored and voted for H.R. 4038, theAmerican Security Against Foreign Enemies Act, which would have expanded and strengthened the screening process for refugees, especially those Syria and Iraq. The status quo screening process for refugees takes about two years before permission to emigrate can be granted; the bill would have paused all Syrian refugees for an unspecified amount of time and eventually resumed the screening process under a lengthened amount of time. The bill passed the House but failed to achieve cloture in the Senate

Iran deal. Pompeo is a sharp critic of the Iran nuclear deal, voting along with every House Republican against ratifying the agreement sought by President Obama and most other world powers. He also introduced H.R. 5940, the No Ransom Payments Act, which would prevent any further federal government payments to Iran unless and until Iran returns the so-called ransom money they received from the Obama Administration and pays American victims of Iranian terrorism. Obama and the Democratsdispute the idea that it was a ransom at all, calling the payment a misnomer and reiterating that it was the first installment in the settlement of a decades-old arms deal. The bill attracted nine cosponsors, all Republicans, but has not received a vote in the House Foreign Affairs Committee.

The Yea votes represented 61% of the country’s population by apportioning each state’s population to its voting senators. 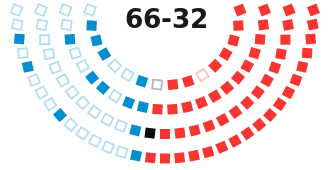