H.J.Res. 40: Providing for congressional disapproval under chapter 8 of title 5, United States Code, of the rule submitted by the Social Security Administration relating to Implementation of the NICS Improvement Amendments Act of 2007.

###The context and what the bill does

The Obama Administration in its closing days instituted a new regulation instituting a novel form of gun control. The rule Public Law 115–8 was recently passed by Congress and signed by President Trump to overturn this rule.

Republicans saw this as an unconstitutional infringement on the Second Amendment and power grab by a Democratic administration whose party had just been voted out of office. They called the existing classifications arbitrary. Other groups like the ACLU added that the rule noted in floor remarks. “The ‘personal opinion’ of a bureaucrat cannot be the basis for taking away a person’s Second Amendment rights. Further… the ‘disorder list’ is a convoluted mess of afflictions that may or may not cause someone to be dangerous. Many of the listed disorders also do not impact gun safety at all. For example, some afflictions deal with anxiety disorders, fear of large crowds, or a lack of self-esteem.”

Opponents counter that the SSA’s rule was both necessary for public safety in a nation awash with guns, as well as constitutional under current interpretation of the Second Amendment.“The Supreme Court recognized in [2008’s] District of Columbia v. Heller ‘that the Second Amendment conferred an individual right to keep and bear arms.’ The Court emphasized, however, that, ‘’[l]ike most rights, the right secured by the Second Amendment is not unlimited,’’ and that ‘‘nothing in [the Court’s] opinion should be taken to cast doubt on longstanding prohibitions on the possession of firearms by felons and the mentally ill,’” the SSA wrote when announcing their rule. “Our actions… are fully consistent with the Supreme Court’s recognition in Heller of the validity ‘of longstanding prohibitions on the possession of firearms by the mentally ill.’”

Introduced by Rep. Sam Johnson (R-TX3) as House Joint Resolution 40, the bill passed the House 235–180 a mere three days later after its introduction.

President Trump signed it into law on February 28. The Republicans seem to be trying to keep this relatively quiet. The White House press release on the law’s enactment did not require compliance until December 2017 anyway, so the gun control law was never fully in effect.

The Yea votes represented 47% of the country’s population by apportioning each state’s population to its voting senators. 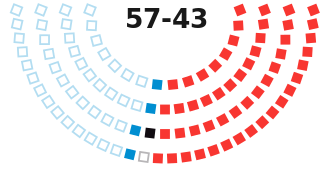