S.J.Res. 34: A joint resolution providing for congressional disapproval under chapter 8 of title 5, United States Code, of the rule submitted by the Federal Communications Commission relating to “Protecting the Privacy of Customers of Broadband and Other

A Republican bill would block a regulation of President Obama’s that they see as executive overreach, but privacy advocates claim it could allow companies to sell your private Internet and search history. Who’s right?

The Federal Trade Commission maintains jurisdiction over most aspects of the Internet. But after the 2016 election during the lame-duck session, another Washington agency called the Federal Communications Commission issued new regulations related specifically to Internet service providers, also known as ISPs. (You’ve probably heard of some of the country’s biggest ISPs, which include Comcast, Verizon, AT&T;, Time Warner, Cox, and CenturyLink.)

These new rules required all Internet browsing data, as well as data regarding app usage on mobile devices, be subject to the same privacy requirements as sensitive or private personal information. This overtook the previous rule by the FTC, the agency which previously had authority over regulating ISP’s and differentiated privacy requirements based upon the sensitivity of the information, with more stringent rules for such things as health information or Social Security numbers. The methods are also more invasive to the ISP companies, since the FCC also issues pre-emptive regulations while the FTC primarily conducted investigations.

Introduced by Sen. Jeff Flake (R-AZ) — chair of the Senate Judiciary Subcommittee on Privacy, Technology and the Law — and Rep. Marsha Blackburn (R-TN7), Senate Joint Resolution 34 and House Joint Resolution 86 are companion bills that would nullify the FCC’s rule. However, they would not return jurisdiction over regulating ISP’s back to the FTC, as they were previously.

Many Republicans saw these new rules as a power grab during the closing days of the Obama Administration. The rule was issued on December 2, 2016 and took effect on January 3, 2017, less than three weeks before President Trump took office. Supporters of the bill argue that the legislation would prevent the one-size-fits-all regulation.

“Under the FTC’s watch, our internet and data economy has been the envy of the world. The agency’s evidence-based approach calibrates privacy and data-security requirements to the sensitivity of information collected,” Senate lead sponsor Flake wrote in a Wall Street Journal op-ed.

“The FCC rules subject all web browsing and app usage data to the same restrictive requirements as sensitive personal information. That means that information generated from looking up the latest Cardinals score or checking the weather in Scottsdale is treated the same as personal health and financial data.”

ISP companies also contended that the FCC rules have placed them at a disadvantage with other non-ISP Internet companies that also collect user data, like Netflix or Facebook.

Privacy advocates warn that the legislation could produce dire consequences for consumer privacy, with Privacy News Online calling it “a bill to let telecoms sell your private Internet history.”

That’s not false, as ISPs have been previously shown to sell user data to third parties, who in turn use it for marketing or other purposes.

The odds of passage are decent — if Trump’s new FCC Commission Ajit Pai doesn’t overturn the rule on his own first. Pai already placed a partial halt to some of the ISP rules in February.

The Senate legislation has attracted 23 cosponsors, all Republicans. It awaits a vote in the Senate Commerce, Science, and Transportation Committee.

The House legislation has attracted 16 cosponsors, also all Republicans. It awaits a vote in the House Energy and Commerce Committee. Blackburn is the third-most conservative House member, based on a GovTrack analysis. 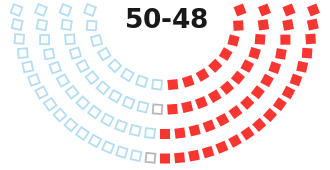