This was a vote to pass H.R. 4909 (115th) in the House. This vote was taken under a House procedure called “suspension of the rules” which is typically used to pass non-controversial bills. Votes under suspension require a 2/3rds majority. A failed vote under suspension can be taken again.

After February’s Parkland high school massacre, a Republican bill introduced mere weeks before is now gaining significant traction — including the Democratic representative from Parkland. It just passed the House.

The House bill was introduced by Rep. John Rutherford (R-FL4) in late January, about two weeks before the Parkland high school shooting in Rutherford’s home state. It did not take place in his home district, located in northeastern Florida bordering Georgia, hundreds of miles from the southern part of the state where the massacre occurred.

Supporters argue the bill will help gives all parties — from law enforcement to teachers to students — improved abilities to potentially stop these tragedies from occurring in the first place.

“As a career police officer and sheriff for 12 years in my hometown of Jacksonville, I know first-hand the importance of communities working together with their law enforcement agencies to keep people safe,” House lead sponsor Rutherford said in a news conference.

“This bill invests in early intervention and prevention programs in our local schools, so that our communities and law enforcement can be partners in preventing violent events from happening. We need to give students, teachers, and law enforcement the tools and training they need to identify warning signs and to know who to contact when they see something that is not right.

While not usually objecting to the actual provisions of the bill, most critics rather argue that the reforms contained are window dressing compared to the true issue of gun control, which most federal Republicans refuse to enact or even consider.

“We certainly should do more to make our schools safer, but it is shameful that we must do so because of our failure to reduce the threat of gun violence to children,” House Judiciary Committee Ranking Member Rep. Jerrold Nadler (D-NY10) said in a press release.

“It should be unacceptable to all of us that we must take steps to train staff and students to protect themselves against these types of incidents, instead of spending more money on actually educating our young people,” Nadler continued. “This bill does not include any provisions to strengthen our gun laws or to help keep guns out of the hands of those who should not possess them. Evidence and experience tell us that we must establish universal background checks instead of the flawed system we now have.”

(Nadler still voted for the bill regardless.)

The bill passed on March 14 by a nearly unanimous 407–10 House vote. Five Republicans and five Democrats voted against it.

It had attracted 94 bipartisan House cosponsors: 61 Republicans and 33 Democrats, notably including Rep. Ted Deutch (D-FL22) who represents the district where February’s massacre took place. Only three of the 94 cosponsors signed on prior to the Parkland shooting. Interestingly, Deutch was one of those three.

The Senate version was introduced on March 5 by Sen. Orrin Hatch (R-UT). It has attracted 35 bipartisan cosponsors: 19 Republicans, 15 Democrats, and one independent. Both of Florida’s two senators, Republican Marco Rubio and Democrat Bill Nelson, have signed on. 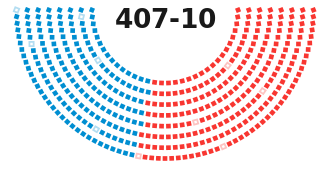