This was a vote to pass H.R. 2219 (115th) in the House. This vote was taken under a House procedure called “suspension of the rules” which is typically used to pass non-controversial bills. Votes under suspension require a 2/3rds majority. A failed vote under suspension can be taken again.

Update: Shortly after this bill passed the House by 405–2, GovTrack Insider wrote in our summary that we could not find any public statements of opposition to the legislation. After publication, we were subsequently informed of opposition by an advocacy group. The article has been updated to reflect their statement.

There aren’t many bills co-sponsored by both Marco Rubio and Elizabeth Warren, but one is the End Banking for Human Traffickers Act, which recently passed the House.

Though great strides have already been made to combat it, the human trafficking industry still generates $150 billion in illegal profits per year, according to the FACT Coalition. That makes it the third-most valuable illegal practice.

One way of halting the practice could be by cutting off the human traffickers’ access to banking and financial funds. That’s the aim of the End Banking for Human Traffickers Act, which passed the House last week.

Supporters argue the bill is an effective means of crimping a despicable crime that still exists all too often.

“Human trafficking has devastated the lives of tens of millions of victims around the world, including here in the United States… This form of modern-day slavery makes criminal gangs billions each year,” House lead sponsor Royce said in a press release.

“The [bill] will help law enforcement and financial institutions identify and report suspected human traffickers so that they can be prosecuted to the full extent of the law,” Royce added. “We must start using every tool at our disposal to help end human trafficking.”

Opponents say the bill would primarily harm not human traffickers as intended, but instead vulnerable people who are pressured or forced into sex work or prostitution.

“Access to banking services is a central component of economic empowerment to improve sex workers’ living and work conditions, reduce their vulnerability to violence, and enable them to manage and plan their finances and future,” the Global Network of Sex Work Projects (NSWP) writes in a position paper.

After attracting a bipartisan mix of nine Democratic and six Republican House cosponsors, the bill passed the House in April by 405–2.

The two dissenting votes were from Freedom Caucus member Reps. Justin Amash (R-MI3) and Thomas Massie (R-KY4), although GovTrack Insider could not determine exactly why. However, the two libertarian congressmen often cast lone “no” votes on measures that would increase federal spending in any form, even if the cause is ostensibly pure. (The Congressional Budget Office estimated the bill would cost less than $500 thousand in total.)

The measure now goes to the Senate, where passage seems likely although as of July 2018, it has yet to receive a vote. In addition to Warren’s introduction, the Senate version has been cosponsored by two others, both Republicans: Sens. James Lankford (R-OK) and Marco Rubio (R-FL). 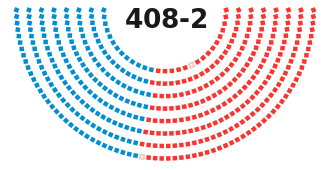