H.J.Res. 2: Proposing a balanced budget amendment to the Constitution of the United States.

This was a vote to agree to H.J.Res. 2 (115th) in the House. This vote was taken under a House procedure called “suspension of the rules” which is typically used to pass non-controversial bills. Votes under suspension require a 2/3rds majority. A failed vote under suspension can be taken again.

The Republican tax reform law passed in December will likely cause trillion-dollar annual deficits starting in 2019 and beyond. That’s not even a Democratic hypothesis — the projections come from a February report from President Trump’s own Treasury Department.

Republicans on April 12 attempted to prevent that outcome — and, according to the more cynical interpretation, attempted to save face shortly after passing a deficit-expanding law — by passing a balanced budget resolution to amend the Constitution.

What the resolution would have done

H.J. Res. 2, introduced by Rep. Bob Goodlatte (R-VA6), proposed a Constitutional amendment that would have required the federal government run a surplus every year. No more deficits, no more adding to the debt.

Under Goodlatte’s proposal, the balanced budget requirement could be waived in a given year by a ⅗ vote in both the House and Senate, if there was a military conflict or emergency. For example, it would have been very difficult to run a surplus in the immediate aftermath of 9/11, given the massive and immediate buildup in military and security spending.

(Notably, the proposal did not make a similar exemption for a financial emergency, as many Democrats would have liked.)

A constitutional amendment resolution needs to pass with ⅔ of each chamber of Congress and then ¾ of the states. Although last week’s vote in the House received more “yes” than “no” votes, it still fell short of the ⅔ required (i.e. 66 percent) with 55 percent supporting.

Interestingly, that’s a lower percentage than the 61 percent who voted in favor the last time the measure received a vote, in 2011 during the GOP’s first year after regaining the House majority.

Most of those Republicans are House Liberty Caucus members, a group which urged opposition by warning in a letter that the measure would likely lead to tax increases, especially during recessions. They also cautioned that the ability to waive the measure by a ⅗ vote in the House could render it essentially toothless in practice, especially if political pressure was high.

These members are among the most conservative House Democrats, who tend to believe more fiscal restraint is necessary in government spending.

The only Democrat to cosponsor it still voted against it

Interestingly, the only Democratic cosponsor of the measure itself, Rep. Peter DeFazio (D-OR4), voted against it when it actually came to a vote, citing likely cuts to entitlement programs and a lack of military spending discipline.

“They [Republicans] just cut revenues by $3 trillion. We’re projecting a deficit of $1 trillion in just two years,” DeFazio said on the House floor. “So something else has got to go, and Speaker Ryan has already talked about what that ‘something else’ is. It’s Medicare, it’s Social Security, and Medicaid.”

“I’ve introduced a balanced budget amendment that makes a little more sense. You can’t have these OCO’s — Overseas Contingency Operations funds — where we shower $50 or $100 billion on the Pentagon and it doesn’t count! It’s creating debt, but it’s ‘off budget.’ Don’t worry about it. Under my amendment, unless you had a declared war [which hasn’t officially occurred since World War II]…you couldn’t have that kind of Overseas Contingency.”

Could this ever pass?

And now the million dollar question: could a balanced budget amendment ever pass?

If it failed this time, it’s hard to imagine a more ideal set of circumstances:

Could any amendment pass?

The issue wasn’t that Republicans weren’t on board, since 97.4 percent of voting House Republicans voted for it. Even if 100 percent of them had voted in favor, it still wouldn’t have passed.

In other words, it may be impossible for any one party to control 66 percent of either the House or Senate, let alone both at once. And in this polarized political environment, it would be challenging to get more than a few Congress members to cross party lines on a constitutional amendment. 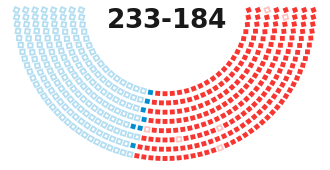