Should one Nevada senator, Sen. Dean Heller (R-NV), be able to single-handedly stymie a bill that just passed the House 340–72? The Nuclear Waste Policy Amendments Act will put that question to the test, when or if the Senate acts on it.

There are currently 121 sites containing nuclear waste, located in 39 states. Where should all the nation’s nuclear waste go?

Many who have studied the issue believe the sites should be combined by all the nation’s waste being shipped and stored to one single site: Nevada’s Yucca Mountain, a fairly remote area where — at least according to supporters — the health risk would be both consolidated and minimal.

The move was officially announced as far back as 1987 with a 1998 deadline, but the project has been scrapped, restarted, and delayed for more than three decades now. That was in no small part due to the influence of longtime head Senate Democrat Harry Reid, who did much to stop or stall the project for two decades straight.

The Nuclear Waste Policy Amendments Act would officially mark Nevada’s Yucca Mountain as the nation’s nuclear waste repository, once and for all.

It was introduced in June 2017 by Rep. John Shimkus (R-IL15), chair of the House Energy and Commerce Committee’s Environment Subcommittee. It’s numbered H.R. 3053.

Supporters argue the bill addresses a problem which has only compounded in its severity since the 1980s, and affects the vast majority of U.S. states.

“It’s long past time for the federal government to keep its 35-year-old promise to taxpayers, ratepayers, and communities across the country to permanently dispose of spent nuclear fuel and defense waste. The [bill] is a commonsense step in that direction” Shimkus said in a press release. “We are committed to helping the 121 communities in 39 states with nuclear waste sitting around get the permanent storage facility up and running.”

Opponents say the bill is dangerous both environmentally and financially, and tramples on Nevada’s state rights.

“Beyond the breach of state sovereignty and the disregard for the will of the local population, the Yucca Mountain proposal poses significant health and safety risks and potentially catastrophic financial risks that must be addressed before — and not after — the proposal moves forward, should it move forward at all,” Heller wrote in a letter to the Senate Appropriations Subcommittee on Energy and Water Development.

“To date, however, Nevadans have not received any assurances from the NRC [National Regulatory Commission] that their concerns will receive the process and consideration they are due under existing law,” Heller continued. “I strongly believe that content-based siting represents the best of both worlds: It provides a viable means of addressing our nation’s nuclear waste problem while respecting the sovereignty of states to object to becoming a nuclear waste dump.”

The bill first attracted 109 bipartisan House cosponsors: 88 Republicans and 21 Democrats. It passed in committee by 49–4 in June 2017.

The full House voted in favor 340–72 in May 2018. Democrats were 119–67 in favor, while Republicans were 221–5. All four of Nevada’s House members voted against: three Democrats and one Republican.

While such overwhelming vote totals in the House might indicate likely passage in the Senate, think again. Sen. Dean Heller (R-NV) has stated that his home state will be so damaged by the bill that he will single-handedly stop it.

Senate Majority Leader Mitch McConnell is highly unlikely to bring up the bill for a vote at all, in order to protect Heller — considered one of the Senate’s most vulnerable Republicans up for reelection this year. Even House lead sponsor Shimkus acknowledged a Senate vote is unlikely.

“Without my leadership in the United States Senate, Yucca Mountain will get the green light. That’s because no one else can stop this; the House of Representatives has repeatedly attempted to bring nuclear waste to Nevada, but each time they’ve hit a brick wall only because I’ve stonewalled their action,” Sen. Heller said in a press release.

“[This] stunt is no different — this bill is dead on arrival to the U.S. Senate. Plain and simple. Not only will I place a hold on the bill immediately, I will object to the motion to proceed and stop this proposal at every procedural turn.” 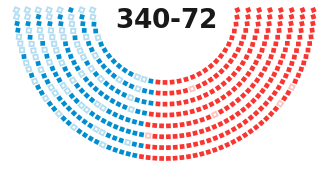