A bill that recently passed the House with large bipartisan support would change the way our country punishes anybody who kills or attempts to kill a law enforcement or police officer.

128 law enforcement officers were killed in 2017. And 2018 is on pace to exceed 2017. While the trend during this century is down, both this year’s and last year’s numbers were higher than the modern low of 2013.

How might legislators try to bring these statistics down further?

The Protect and Serve Act would categorize crimes against law enforcement as hate crimes, and significantly increase penalties accordingly.

The House bill makes any intentional attempt to physically harm a law enforcement officer a federal crime, and would imprison all offenders for a maximum of 10 years. That increases to life in prison if the officer is killed.

The Senate version goes a step further, by classifying such attacks against law enforcement not just as a federal crime but as a hate crime. However, the prison sentences would still be the same.

Supporters argue the bill takes a harsher approach to those who would impede public safety.

“After 27 years in law enforcement, I believe that officers must hold themselves to the highest standards, be accountable to their communities, and perform their duties with honor and integrity. There has been a 75 percent increase in officers shot and killed this year,” cosponsor Rep. Val Demings (D-FL10) said in a press release.

“Ambush-style killings have taken numerous officers’ lives. Last month, two sheriff’s deputies here in Florida were assassinated while eating lunch,” Demings continued. “We must give our officers the tools, training, and protections needed to be safe on the job. I call on my colleagues in Congress to do our job so our officers can do theirs.”

While the House vote enjoyed large bipartisan majorities, some holdouts existed on both the right and the left.

“First, police already have substantial protections under federal and state law, rendering this bill superfluous,” wrote a letter signed by several dozen organizations across the ideological spectrum, from the ACLU and NAACP to the National Council of Churches. “Second, this bill signals that there is a ‘war on police,’ which is not only untrue, but an unhelpful and dangerous narrative to uplift.”

“And finally, bills similar to Protect and Serve that have been introduced in states around the country — so called ‘Blue Lives Matter’ bills — appear to be a political response to the growing national movement for police accountability in the face of continued killings and assaults of unarmed African Americans,” the letter continued. “Therefore, this bill is divisive and will have a negative impact on the relationship between law enforcement and the communities they serve.”

After attracting four Republican and one Democratic House cosponsors, the bill passed the House overwhelmingly only a week after its introduction.

The bill now goes to the Senate, where it has attracted one Senate cosponsor: Sen. Heidi Heitkamp (D-ND). (Although, again, it had few cosponsors in the House but still passed overwhelmingly.) 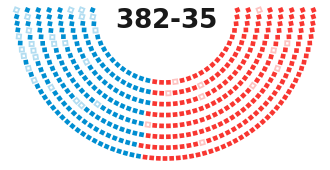