If the World Bank doesn’t live up to some of its promises for supporting human rights, fighting terrorism, and promoting democracy, should the U.S. government withhold hundreds of millions dollars of funding?

The World Bank’s International Development Association (IDA) lends billions of dollars to the poorest countries for projects such as infrastructure, health services, clean water and sanitation, and economic development.

However, the Bank’s IDA has come under criticism for failing to safeguard human rights and at times giving money to corrupt governments who pass on little if any to their impoverished citizens. Examples include encouraging exploitative gold mining in Haiti or rapes during construction of a road project in Uganda.

Last year, IDA money went to Sudan and Syria, both designated by the U.S. State Department as state sponsors of terrorism.

The U.S. was the IDA’s second-largest funder last year, behind only the United Kingdom. But the Trump Administration’s budget request to Congress proposed a 15 percent cut, from the Obama-era annual level of $1.29 billion to $1.09 billion.

Trump argued that America “pays more than its fair share,” an identical argument he’s made in proposing payment cuts to other international institutions such as the United Nations and NATO.

The IDA took in about $19.5 billion last fiscal year, meaning the U.S. contributed approximately 6.6 percent of that total — significantly lower than the U.S. 15 percent of the global economy.

The World Bank Accountability Act would withhold 15 to 30 percent of the U.S. annual contribution until certain conditions are met.

Specifically, the Secretary of the Treasury would have to compile a report and confirm to Congress that the IDA:

Supporters argue the legislation defends American values abroad, and puts our money where our mouth is.

“Giving the World Bank a blank check from U.S. taxpayers has enabled the poverty-fighting organization to lose its way,” Rep. Barr said in a press release. The bill “makes our future contributions to the Bank conditional on reforms that will help better fight poverty, uphold human rights and democracy, prevent the flow of funds to corrupt governments and those who support terrorism, and improve oversight and accountability.”

“We work to hold the World Bank more accountable and to help it better achieve its mission of reducing poverty around the world,” Barr said.

Opponents counter that there are other ways to achieve the admirable policy aims, but the funds are too much of a lifeline for the world’s most needy to be subject to cuts on what they perceive as the whims of a myopic ‘America First’ Trump Administration agenda.

“For many years, the Financial Services Committee has worked in a bipartisan fashion to achieve a number of important reforms at the World Bank, including increased transparency, the creation of the inspection panel, more disclosure of information, and closer consultation with local communities most affected by World Bank projects,” House Financial Services Committee Ranking Member Maxine Waters (D-CA43) said on the House floor.

“We were able to successfully advance these policy goals through serious and direct negotiations and sustained engagement with both the Department of the Treasury and the World Bank itself, not by threatening to walk away from our commitments.”

The bill passed the House Financial Services Committee in July by a unanimous vote of 60–0.

Meanwhile, Democrats voted 21–168 against, with 88 percent opposed. What changed from the earlier committee vote during which every Democrat was in favor?

“Democrats made it clear during consideration of this bill in committee that our ongoing support for the measure would depend upon changes to provisions in the bill moving forward that put critical U.S. funding at risk,” Waters said on the House floor. “But here we are today and Republicans have not made any effort at all to address our very specific concerns.”

The bill now goes to the Senate for consideration. 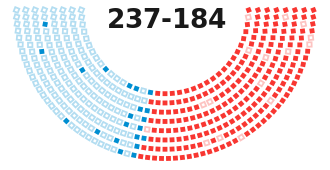