This was a vote to pass H.R. 5841 (115th) in the House. This vote was taken under a House procedure called “suspension of the rules” which is typically used to pass non-controversial bills. Votes under suspension require a 2/3rds majority. A failed vote under suspension can be taken again.

Since 1975, the Committee on Foreign Investment in the United States (CFIUS) has been tasked with ensuring that America’s foreign investments don’t harm its national security. An interagency committee, it’s led by the Treasury Secretary.

Although it’s only able to produce recommendations to the president instead of issuing its own policies, presidents of both parties through the decades have often heeded its calls. President Trump blocked a Chinese company’s attempted purchase of an Oregon-based semiconductor company in 2017, and also blocked a Singapore company’s attempted purchase of a California-based telecommunications equipment company in March — both after the CFIUS recommended he do so.

However, many critics believe the CFIUS has become out of date after failing to be updated for many years — in a way that could inadvertently harm our national security.

Most notably, the committee would be required to look at entire industries or sectors, rather than individual proposed acquisitions or takeovers on a case-by-case basis. What might that look like in practice? Take the example of the sector of cinemas and movie theaters. As Rep. Brad Sherman (D-CA30) said during a committee hearing:

Supporters argue the bill eliminates loopholes and other issues that allow other nations to — in their view — exploit businesses headquartered in the United States.

“By exploiting gaps in the existing CFIUS review process, potential adversaries, such as China, have been effectively degrading our country’s military technological edge by acquiring, and otherwise investing in, U.S. companies,” Sen. Cornyn said in a press release.

“This undermines our national security and highlights the imperative of modernizing the CFIUS review process to address 21st century threats,” Cornyn continued. “This bill takes a measured approach by providing long overdue reforms to better protect our country, while also working to ensure that beneficial foreign investment is not chilled.”

Opponents counter that the bill’s changes would be too broad and get the government too involved in private economic decisions in a way that fails to truly protect national security.

“These ‘reforms’ of CFIUS constitute a fundamental departure from the committee’s traditional practice of narrowly identifying national security threats arising from foreign acquisitions,” writes Theodore H. Moran for the Brookings Institution, “without excluding foreign acquisitions across entire industries, sectors, or areas of the U.S. domestic economy that might reduce the U.S. technological and industrial advantage vis-à-vis another country.”

“U.S. national interests would be best served by maintaining CFIUS’s narrow focus on specific threats that might arise from particular acquisitions within industries,” Moran continues. “Excluding entire industries, sectors, or areas of the U.S. economy from foreign acquisitions — with zero-sum attention to whether such acquisitions might erode U.S. technological or industrial advantage vis-à-vis the home country of the acquiring firm — could weaken U.S. competitiveness.”

The Senate version was reported favorably by the Committee on Banking, Housing, and Urban Affairs in May 2018. It awaits a vote in the full Senate, where it has 12 bipartisan cosponsors: seven Republicans and five Democrats.

The House version was also favorably reported the same month by the House Financial Services Committee, by a unanimous 53–0 vote. It awaits a vote in the full House.

A similar previous version also introduced in the House by Rep. Pittenger last year attracted 50 bipartisan cosponsors: 42 Republicans and eight Democrats. The subsequent revised version only has one cosponsor, but is the only one the sponsor is pushing forward. 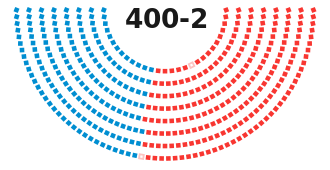