Should medical devices be taxed to help pay for Obamacare?

The Affordable Care Act, more commonly known as Obamacare, imposed a 2.3% tax on imported medical devices. (There were a few exceptions, such as for devices directly available for purchase by consumers.)

The medical device industry, which opposed the tax, claims to account for more than half a million American jobs and $150 million to the economy. The IRS reported that about a quarter of the intended revenue from the tax was going uncollected.

Once Republicans took over both chambers of Congress in 2015, the tax was temporarily suspended for the two years of 2016–17. President Obama signed the law despite misgivings about that provision, since it was a component of a much larger appropriations bill to fund the government.

The bill was introduced on the first day of this Congress in January 2017 by Rep. Erik Paulsen (R-MN3).

The Joint Committee on Taxation also calculated that the bill would enlarge deficits by $2.2 billion per year.

Supporters argue that permanently repealing the tax would be a boost to the economy and help contribute to innovation with new and improved products in the medical field.

“One of the best ways to protect American manufacturing, spur innovation, and make sure the latest and best medical technology is affordable for patients is to repeal this burdensome tax,” Rep. Paulsen said in a press release.

“We are already seeing new American jobs and increased investment in research and development as a result of the temporary suspension of this tax,” Rep. Paulsen continued. “With over 200 cosponsors at the start of this new session, and with overwhelming bipartisan support in the past, permanent repeal should be a top priority for Congress.”

Paulsen has received the third-most money from the medical device industryof any member of Congress this year.

Opponents counter that the tax helps pay for the law, lowers deficits, and under the status quo is already half the rate proposed in original drafts of the law.

(The tax was originally supposed to be 4.6%, but that was halved during negotiations at the bequest of not only Republicans but also some Democrats, such as then-Sen. John Kerry.)

“When the Affordable Care Act was being crafted, the medical device industry… what I’m saying is they agreed to the deal,” Rep. Bill Pascrell (D-NJ9) said on the House floor during debate. “They knew that the increase in health coverage of millions more Americans would directly increase the demand for medical devices.”

Despite Republican warnings that the tax would decimate the medical device industry, sales increased by $41 billion between 2005 and 2014, according to the Government Accountability Office.

“Many medical devices are sold to people old like myself, who are on Medicare. And you continued to cut Medicare and you will be cutting off your nose to spite your face,” Pascrell continued.

“Additionally, this year the industry has stood to benefit tremendously from the reduction in the corporate tax rate, down to 21%. You didn’t get that break and I didn’t get that break. And there’s nothing that will lead me to believe these benefits will trickle down to help patients afford the devices they need to survive.”

The bill first attracted 279 bipartisan House cosponsors: 233 Republicans and 46 Democrats. With more than ⅗ of the House co-sponsoring, it was a foregone conclusion that the bill would pass.

It next goes to the Senate, but success is hardly guaranteed. A previous version of the bill in 2015 passed the House by an almost-identical margin — only to never receive a vote in the Republican-controlled Senate.

Although the tax was not permanently repealed then, it was temporarily suspended for two years, granting Republicans a lesser victory nonetheless. 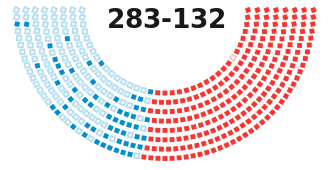