This was a vote to pass S. 1182 (115th) in the House. This vote was taken under a House procedure called “suspension of the rules” which is typically used to pass non-controversial bills. Votes under suspension require a 2/3rds majority. A failed vote under suspension can be taken again.

The House Amendment to S. 1182 extends the National Flood Insurance Program, which is set to expire July 31, 2018, through November 30, 2018. This amendment does not include any reforms to the program; it is only a short-term extension.

Recognizing the program is broken and in need of repair, Congressman Sean Duffy (R-WI) introduced the 21st Century Flood Reform Act (H.R. 2874), a collection of seven bills approved by the House Financial Services Committee that would reauthorize the NFIP for five years, introduce private market competition, and provide programmatic reforms to help policyholders.

In the wake of massive storms, including hurricanes Harvey, Irma, and Maria, on November 14, 2017, the House overcame its points of contention and passed the 21st Century Flood Reform Act. The Senate, however, did not act on this legislation.

With the July deadline approaching, on June 28, 2018, the U.S. Senate approved its version of the farm bill, which includes an amendment that would extend the authorization of the NFIP for six months. The House opposes a six-month extension because it would leave the fate of the program up to the 116th Congress. The House Amendment to S. 1182 only extends the program until November 30, 2018, maximizing pressure on Congress to enact a permanent solution that makes necessary reforms and provides certainty for insurance providers and housing markets. 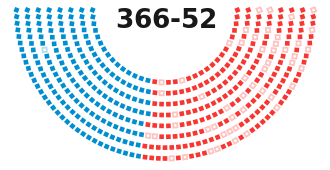