This bill became the vehicle for passage of continuing appropriations which re-opened the federal government after a three-day shut-down. The bill:

This bill had an unusually complex legislative history and previously contained provisions on an unrelated matter.

The bill became the government funding bill on Jan. 18, 2018, when the House replaced the previous text of the bill (described below) with the short-term continuing appropriations provisions to fund the government through Feb. 16, 2018 (vote). In replacing the text, the House sent the bill back to the Senate.

But the bill failed to be passed by both chambers in this form following a failed Senate cloture vote late in the night on Jan. 19, leading to a government shutdown beginning on Jan. 20, when the most recent appropriations laws expired. Senate Democrats largely opposed the bill because it did not include an extension of the immigration program Deferred Action for Childhood Arrivals (DACA). Senate Republicans and President Trump largely opposed including DACA without provisions to strengthen border security, which Senate Democrats opposed.

After three days of negotiations, an agreement was reached on the final measure --- which was identical to the House-passed bill except that funding would be made for a shorter period of time to force another negotiation sooner. No provisions related to DACA or border security were added after all.

On Jan. 22, 2018, the Senate achieved cloture and then passed the bill with the revised end date of the appropriations, the House passed the bill, S. Con. Res. 33 was passed in both chambers to add the original Federal Register positions back into the bill (see below), achieving the bill's final form described at the top of this summary, and the President signed it.

H.R. 195 was originally introduced only as a simple cost savings bill by "restrict[ing] the distribution of free printed copies of the Federal Register to Members of Congress and other officers and employees of the United States," saving $1 million annually. It passed the House in that form on May 17, 2017, but these provisions were removed when the Senate passed the bill (explained next), and then were added back in the final form of the bill (explained above). (Also see the Senate companion bill S. 1195, which is now moot.)

On Dec. 21, 2017, the Senate replaced the text of the bill in whole with Kevin and Avonte's Law of 2017, an extension of an alert program for missing Alzheimer’s disease patients, sending the bill back to the House. Further action on this matter may occur on S. 2070 or H.R. 4221. When the House brought the Senate-revised bill back to the floor on Jan. 18, 2018, it replaced the bill's text again, in whole, with the government funding bill, as described above. 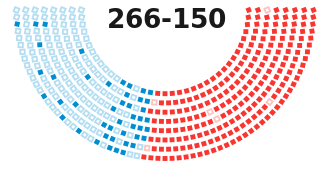