This was a vote to pass H.R. 6147 (115th) in the Senate. The federal budget process occurs in two stages: appropriations and authorizations. This is an appropriations bill, which sets overall spending limits by agency or program, typically for a single fiscal year (October 1 through September 30 of the next year).

H.R. 6147 provides a total of $58.675 billion in total discretionary budget authority for agencies within the Interior, Environment, and Related Agencies Appropriations Act and the Financial Services and General Government Appropriations Act. This includes $35.252 billion for the Department of the Interior, the Environmental Protection Agency, and related agencies and $24.423 billion for the financial services and general government provisions.

###Division A ####Title I—Department of the Interior

The bill provides a total of $13.046 billion for the Department of the Interior, including funding for:

####Title II—Environmental Protection Agency The bill funds EPA at $7.958 billion, $100 million below the fiscal year 2018 level.  Within this total, EPA’s regulatory programs are reduced by $228 million below the current level. The legislation supports the President’s proposal to reshape the Agency’s workforce by providing resources requested to offer buyouts and voluntary separation agreements to employees.

The bill also targets additional funding provided by the recent budget agreement to infrastructure programs, including:

This bill includes a full repeal of the “Waters of the United States” regulation.

Also included is a multiple agency directive to EPA, the Department of Agriculture, and the Department of Energy to establish clear policies that reflect the carbon neutrality of biomass, as well as a provision prohibiting EPA from making changes to certain agricultural exemptions under the Clean Water Act.

The bill provides a total of $13.882 billion for Related Agencies funded under the bill, including funding for:

– The Smithsonian Institution is funded at $1 billion in the bill, $12 million above the fiscal year 2018 enacted level. This level is sufficient to allow all current operations and programs to continue. The bill also includes $225 million toward the multi-year renovation of the National Air and Space Museum.

Division B appropriates $23.423 billion in funding for the Treasury Department, the Judiciary, the Small Business Administration, the Executive Office of the President, the Securities and Exchange Commission, and other related agencies. The major provisions of Division B of the bill are as follows:

The Yea votes represented 91% of the country’s population by apportioning each state’s population to its voting senators. 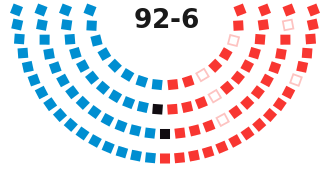