Even some Democrats believe that the 2010 law passed in response to the Great Recession went too far and may have inadvertently punished smaller loaning and lending institutions.

The Economic Growth, Regulatory Relief, and Consumer Protection Actwould pare some of those rules back — and many red state and rural Democrats are on board.

After the financial crash and Great Recession of 2008–09, a Democratically-controlled Congress passed the Dodd-Frank Wall Street Reform and Consumer Protection Act of 2010. The bill tightened regulations on the financial institutions which most Democrats believed were primarily responsible for the crash.

However, most Republicans continue to — and even some red-state or rural Democrats have come to — believe some of the regulations were flawed. In particular, their biggest criticism is that the law made little to no distinction between the massive institutions which contributed to the crash versus the smaller or community-based banks and lenders which didn’t.

The legislation contains several provisions, among the most noteworthy:

The bill was introduced on November 16 by Sen. Mike Crapo (R-ID), Chair of the Senate Banking Committee. It has been labelled as S. 2155.

Supporters argue that the bill reins in elements of a law which went too far and stifled businesses and economic growth with red tape.

“A strong and vibrant economy is important for American consumers, businesses, and the stability of the financial sector,” lead sponsor Crapo said in a press release. “This bipartisan legislation will significantly improve our financial regulatory framework and foster economic growth by right-sizing regulation, particularly for smaller financial institutions and community banks.”

Earlier this week, the White House also offered its official statement of support. “The bill is consistent with the Administration’s core principles for regulating the United States financial system,” the White House wrote in a Statement of Administration Policy. “Specifically, the bill would advance the principles of: (1) fostering economic growth; (2) making regulation efficient, effective, and appropriately tailored; and (3) empowering Americans to make independent financial decisions and informed choices in the marketplace.”

“They [Republicans] insisted on raising the FSOC level to $250 billion, a level twice as high as is prudent. As I have noted before, the failure of two or three such institutions would put us in Lehman Brothers territory,” Frank wrote in a CNBC op-ed. “While I share the view… that responding to the concerns of small and midsized banks has both substantive and political arguments in its favor, I believe that the price the Republican colleagues are demanding is too high.”

Moreover, bank profits are currently at record levels, leading many to question whether their growth is truly being stifled as the bill’s advocates claimed.

A motion to invoke cloture, or a means to end debate and proceed to a possible up-or-down vote, passed by 67–32 on March 6. While not exact, this provides a good proxy for how the vote would likely break down now that the bill is expected to receive a vote by the full Senate in mid- to late March. Indeed, today, March 14, when the the Senate passed the bill the vote was 67–31.

Republicans were unanimously in favor 50–0 with Sen. John McCain (R-AZ) absent for health reasons. Democrats opposed 16–31, although that was still a sufficient amount of support to surpass the 3/5 overall support necessary in the Senate.

The bill had originally been voted in favor by the Senate Banking, Housing, and Urban Affairs Committee in December.

The Yea votes represented 58% of the country’s population by apportioning each state’s population to its voting senators. 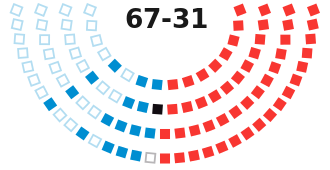