This was a vote to pass H.R. 1122 (116th) in the House. This vote was taken under a House procedure called “suspension of the rules” which is typically used to pass non-controversial bills. Votes under suspension require a 2/3rds majority. A failed vote under suspension can be taken again.

Should families receiving government assistance for housing be encouraged to move to more well-off neighborhoods?

The government’s Housing Choice Voucher (HCV) program was created in 1937 during the Great Depression to help low-income families afford housing costs. A person or family receiving the voucher chooses their own residence (as long as it meets the program’s requirement), and a housing subsidy is paid to the landlord. Recipients only have to pay about 30 percent of housing costs.

A 2015 Harvard study found that voucher recipients who move to better-off neighborhoods were better educated and later earned more. Yet a House Financial Services Committee report found that the program has not been as effective as it could be. Lower-income families receiving the voucher did not move out of lower-income neighborhoods as often as many of the program’s supporters would prefer.

The Housing Choice Voucher Mobility Demonstration Act would establish a pilot program to award housing vouchers to in such a way to encourage recipients to move to communities with less poverty.

The Department of Housing and Urban Development (HUD) would administer the program for up to five years, at the conclusion of which it would submit a report to Congress — and, if successful, the program could possibly expand nationwide.

Supporters argue the bill helps those who need a leg up, by better targeting an existing government assistance program to help people move out of poverty.

“This piece of legislation is all about expanding opportunities for low-income families that have been left behind,” Rep. Cleaver said in a press release. “As a former resident of public housing, I know firsthand that these individuals are desperately seeking greater access to employment opportunities.”

“By allowing families to relocate to low-poverty areas with better job prospects, we can help end the cycle of poverty that has ensnared far too many American families for too long,” Rep. Cleaver continued.

Opponents counter that the bill tweaks an existing big government program, rather than limiting or even ending its usage as they would prefer. The few House members who voted against the legislation are all limited-government Freedom Caucus or Liberty Caucus affiliated Republicans.

However, GovTrack Insider was unable to locate any explicit statements of opposition. No House member publicly spoke out against the bill during floor debate.

Every voting Democrat was in favor, 219–0. Republicans largely supported as well, though with some dissenting votes: 168–22.

It now goes to the Senate, but could face the same fate as last year. A previous version passed the House, then under Republican control, by a similar 368–19 vote — but never received a Senate vote. 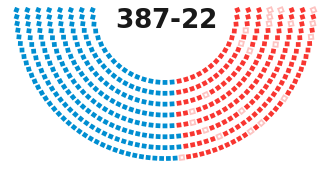