This was a vote to pass H.R. 596 (116th) in the House. This vote was taken under a House procedure called “suspension of the rules” which is typically used to pass non-controversial bills. Votes under suspension require a 2/3rds majority. A failed vote under suspension can be taken again.

Should the U.S. officially recognize Russia’s annexation of the Crimea section of Ukraine?

In 2014, Russia under Vladimir Putin claimed a portion of bordering Ukraine called Crimea as its own, in Europe’s biggest land acquisition since World War II. Many criticize this move as an undemocratic power grab, in line with Putin’s perceived goals of expanded global influence by any means necessary.

The Department of Defense is banned from recognizing or acknowledging Russia’s annexation, in both the 2017 and the 2018 versions of the annual National Defense Authorization Act.

The Crimea Annexation Non-Recognition Act would extend that prohibition to the entire federal government.

It was introduced in the House on January 13 as bill number H.R. 596 by Rep. Gerry Connolly (D-VA11), a member of the House Foreign Affairs Committee.

Supporters argue the bill punishes a regime that has mostly gotten a slap on the wrist for conquering territory, a practice best left in the 20th century and prior.

“Congress must lead the way in refusing to acknowledge the forcible and illegal annexation of Crimea. Failure to stand up to Russian aggression in the region will only embolden Putin,” Rep. Connolly said in a press release. “We are declaring with one bipartisan voice that Congress stands with Crimea.”

While neither President Trump nor the White House appear to have commented on this specific bill, last year Trump vowed to ignore enforcement of the similar provision applying to the Defense Department.

That provision “purport[s] to dictate the position of the United States in external military and foreign affairs,” Trump said in a written signing statement, as he signed the overall bill due to its increase in the military budget, even as he criticized several individual provisions.

“My Administration will treat these provisions consistent with the President’s exclusive constitutional authorities as Commander in Chief and as the sole representative of the Nation in foreign affairs,” Trump continued, “including the authorities to determine the terms upon which recognition is given to foreign sovereigns, to receive foreign representatives, and to conduct the Nation’s diplomacy.”

The bill passed the House almost unanimously on March 12 by a vote of 427 to 1. Among voting members, only Rep. Thomas Massie (R-KY4) opposed.

While Massie does not appear to have yet publicly offered a reason for his vote, he has previously been noted as one of the Kremlin’s biggest supporters on Capitol Hill, often defending his viewpoints on fiscal grounds. Rep. Massie that same day was also the lone dissenter on a companion bill calling for justice for the assassination of Boris Nemtsov, a vocal Putin critic believed to have been killed by the Russian government. 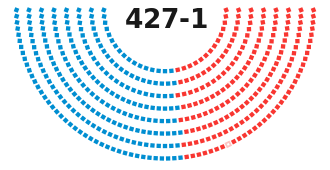